When Approached by the GOP This Fall, Just Say Ney. 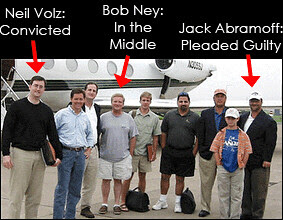 When news broke of Bob Ney‘s confession to taking bribes and making false statements (which would have to be half a billion counts), the one sentence that stood out in this AP article more than any other was this:

Ney did not resign his seat. Several officials have said the congressman is financially strapped and needs his $165,200 annual paycheck and benefits as long as he can continue to receive them.

If this is the real reason why Ney hasn’t stepped down, then it reveals him to be an even sleazier Republican fuck then we already knew he was. Now, I know you have to practically commit murder in order to get thrown out of Congress but if the GOP leadership and the White House, with their “timely” condemnation, calls for his resignation and he refuses to because he needs to stay on the taxpayer dole a little longer in order to stay solvent...

Well, people, we really need to use those subpoena powers that retaking the House will give us this year. It’s obvious that the likes of Hastert and Boehner only want Ney out of Congress before he infects the rest of the flock. Because let’s take stock of all the GOP scumbags who’ve had to resign from Congress since last winter: “Duke” Cunningham, Tom DeLay, Mark Foley and it looks as if Bob Ney will be next. You'd think that the right side of the aisle in the House chambers was on fire from all the defections. Half these upholstered jackals have been tied to Jack Abramoff and we all know that virtually every Republican has been a regular at K Street if not Abramoff’s restaurant, Signatures. It certainly doesn't end with DeLay and Ney.

And if we hear any more shit from Nancy Pelosi about how it isn’t in the Democrats’ best interests to impeach murderous clowns like Bush or go after crooks like Bob Ney and Dennis Hastert, then I think it’s about time we started bandying about names other than Pelosi’s for House Majority Leader or Speaker of the House.

Because if the Democrats continue to be as lethargic about attacking corruption at the highest levels of the GOP, then not only are they part of the problem but it may also be worth the DOJ’s time to find out why exactly they’re soft-pedaling white collar crime in Congress.

-Thanks again, Jurassicpork, of Welcome to Pottersville!
Another excellent guest post.
-SBT-