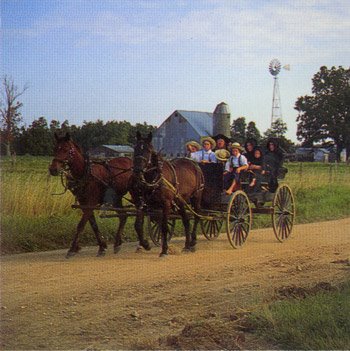 At a time when many are having a hard time swallowing the blood running fast and foul in the waters of Iraq, news of the Amish school shooting struck a heavy blow. Of all victims, who could be less deserving but children of the peaceful, gentle Amish? And we have been obsessively trying to imagine how it all could have happened...

The shooter's funeral was held on Saturday; about 75 people attended, and about half were Amish. They came to mourn the man who had killed five of their young school girls and had wounded five more in a " brief, unfathomable rampage."

And what were they doing at the memorial service? Why ever did the reclusive and withdrawn Amish attend? Bruce Porter, a fire department chaplain who attended the service, said, "It's the love, the forgiveness, the heartfelt forgiveness they have toward the family. I broke down and cried seeing it displayed." Marie Roberts, the shooter's widow, he said, "was absolutely deeply moved, by just the love shown." Why, indeed.

Knowing how much the corporate media and its viewers have fixated on the story of Republican Congressman Mark Foley's sexual predation of children, and also knowing how transfixed, we as a nation, have been with the Amish school girl killings, including the lurid details of how the shooter had intended to sexually assault the girls before killing them, I wonder if anyone is still paying attention. Because in America, wearing a cowboy costume and being a bully can make one a most underserving hero. And, it seems there is a lesson in this story for which America is long overdue. Anyone taking notes?