Fercryingoutloud, This Blog Needs a COCKTAIL!

How about this lovely, and very blue, cocktail?

Because nothing says UNRULY more than a blue cocktail.

Cocktails not your thing?

While looking around for a video to embed, I stumbled upon "Pricasso" (absolutely not mis-spelled) and believe me, while I'd love to embed it, I'll just give you the link; it is SO not safe for work, but it's truly unruly art in action - totally pant free!

Still looking for something unruly, blue, and somewhat wasted. This oughta work:


TAGS: Belly up to the bar, Open Thread, Have fun - or else!, Pricasso
Blue Man GroupBlue Blue O'Reilly 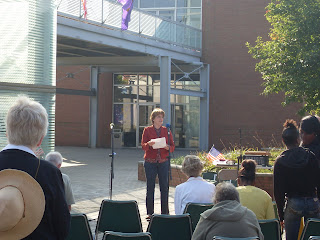 (These are my comments I will make this morning at the interfaith observance of the eighth anniversary of 9/11 at the Peace Bell in Newport, Kentucky.)


Since that first September 11th, we have lived in the shadow of an axis of evil. That’s what former President George W. Bush called it. An axis of evil: Iraq, Iran and North Korea. All accused of helping terrorism and seeking weapons of mass destruct-ion. All used to justify his War on Terror.

But while President Bush was plotting his axis of evil, the September 11th tragedy brought an outpouring of sympathy from all over the world. Throughout Europe, churches on September 12th rang their bells as people held a minute of silence at noon. The world’s sympathy came from places as far off as Tehran, where thousands of Iranians lit candles and stood in silence in the streets of the city in solidarity with the people of the United States.

Friends, we need to remember this. Before the bombs and the torture, there was a unified response by the global community. Prayers of every faith circled the earth…for the healing of the nations.

And I am the one who is just naïve enough to say to you this day – eight years later – that the healing potential of that moment has not been lost. That spontaneous outpouring of goodwill still holds the potential for a new way forward…a spark of the divine still flickers…lighting the point of a new axis: an axis of friendship.

An axis of friendship. Now that may sound all warm and fuzzy to you…kum ba ya, my Lord, and all that jazz. But as a Christian, I know Jesus had some pretty serious things to say about friendship. Like we are to love God and our neighbor. And just to be clear, Jesus added, we are to love our enemies, too. Because when we love our enemies, we create the possibility of their becoming our friends. And Jesus said we are to risk everything for our friends.

Yes, scripture teaches that we are to live peaceably with everyone. And not to be overcome by evil, but overcome evil with good. This means that in the face of dangerous situations and hostile governments, we are called to find solutions that respect human rights and life, that generate mutual respect and accountability, and lead to genuine peace.

Friends, there are so many hurting places in the world today who desperately need our friendship. Places like the Democratic Republic of the Congo, where almost six million people have died in the past decade. Places like the Philippines and Sri Lanka and Zimbabwe where governments heap hardship and suffering on the people. And, yes, places like Iran where just this summer we saw people die for the sake of free elections, and North Korea where their nuclear development continues to raise a serious obstacle to peace.

So let us declare at this place – the Peace Bell in Newport, Ky, an axis of friendship. Let us affirm here at this place our commitment to diplomacy for resolving conflicts. And let our pathways home from this place be ways of nonviolence.

And, you know, with our interfaith commission going into hibernation for awhile, the imperative lies with us. We have to take the initiative now. We have to be the ones to extend the hand of friendship. To find ways to celebrate our diversity and to promote understanding. And it starts with us - in our churches, mosques and synagogues.

So let us stand together here today – an axis of friendship – let us affirm our commitment to peace. And let it begin with me, Lord, let peace begin with me. Amen.