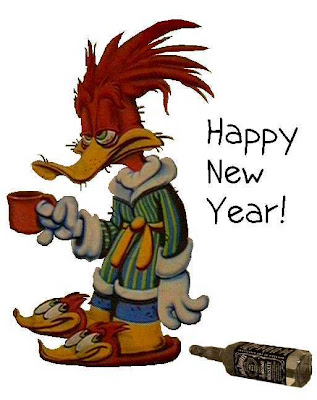 This image, found on the nets, is titled Happy New Years 2000. Whether you think the decade ends tonight (technically not, but most people see decades that way if not centuries) or a year hence, it's been pretty crappy hasn't it? Filled with disasters. Bush. 9/11. Bush. Katrina. Bush. A tsunami that killed hundreds of thousands in Indonesia. Bush. Afghanistan. Bush. Iraq. Bush. Abu Ghraib. Bush. Gitmo. Bush. Economic meltdown, and did I mention Bush?

Then there was the biggest disaster of all, Cheney.

Anyway, I'll be glad to be shed of the era that the Brits call the Naughties. Although honestly I don't think that a change of the tens column digit is anything to hang our hopes on.

Try to avoid driving drunk tonight, and if you can't at least try to remember that the road is that thing between the two lines of telephone poles. And keep the shiny side up.

"There Are Enough Villains to Go Around"

Transcript HERE
I don't think much commentary is necessary to embellish KO's commentary except on this one point:

"And Sen. Reid, put the public option back in, or the Medicare Buy-In, or both. Or single-payer. Let Lieberman and Ben Nelson and Baucus and the Republicans vote their lack-of-conscience and preclude 60 "ayes." Let them commit political suicide instead of you."

I don't think Leader Reid or any of the other 'centrist' Democrats or fucktard Republicans who wage legislative war against their own constitutents give a flying rat's ass about 'political consequences' anymore. They know the system, and they know that over 90% of them have their seats because they spent more on campaign advertising than their opponent. Voters don't matter, they haven't for a long time. Only contributors matter, which means only large corporations.

And what if they do get turfed out of office by some principled upstart, the next Al Franken or Alan Grayson? They'll be richly rewarded by the same corporations - a seven figure sinecure at some think tank, perhaps. Or maybe they'll turn around and join one of the lobbying firms - corrupting in turn their successors as they have been corrupted.

If this is the way that sausage is made these days in Washington, it's time to get a new butcher.

Email ThisBlogThis!Share to TwitterShare to FacebookShare to Pinterest
Labels: Crony Capitalism, Exploitation of the weak and powerless, Olbermann, Politics and Policy

It Looks Like That Time of the Year Again.

And well past time for a new thread, don't you think?