A Toast To Teddy!

You Tell 'em, Senator Franks!
This is how it should be done. If there were a Talking To Wingnutz Prize, Barney Frank would win it hands down for the line, "on what planet do you spend most of your time?" He would also be runner-up in the same category for the comparison of the questioner to a dining room table.

Honorable mention would go to Rep. Rick Larsen (D - WA) for his now-famous line, "I've got the facts on my side, you've got Glenn Beck."

The Democrats WON the last two elections handily. They should use their position of power to marginalize the wingnutz at every opportunity.
Frankly, I love this stuff!

This woman probably came away from this meeting complaining that Senator Frank didn't take her seriously. Not so. If someone is talking out of their ass, this is HOW you treat them seriously. I mean really, the woman is carrying a sign depicting Barack Obama as Hitler, and she starts her question off with "Why do you continue to support a Nazi policy?" To acknowledge such an approach as being anything but straight out of the loony bin is to hand the conversation over to those who came straight out of the loony bin.

Rachel Maddow Has Already Taken Down 60Plus.org, but there's one more little nugget...

Rachel Maddow has already exposed 60Plus.org's affiliation to Jack Abramoff. But there's a motive and some connections of 60Plus.org, that I wanted to explore, so I did some more digging.

The Ad: In case you haven't seen it. Clearly senior scare mongering -

Rachel Maddow's Take Down and Tie to Abramoff:

60Plus.org would like to be known as "the conservative alternative to AARP." It's president is Jim Martin which you wouldn't know from the website itself; you'd need to do an advanced google search to dig up this bio-page:

Now Mr. Martin serves as the President of the 60 Plus Association, which has been called an "increasingly influential lobbying group for the elderly--often viewed as the conservative alternative to the American Association of Retired Persons."

60 Plus is a hard hitting organization dedicated to protecting the tax rights of seniors, and to repealing the most confiscatory of all taxes--the inheritance or estate (death) tax. Jim Martin has been quoted as saying that while there are two certainties in life, taxes and death, now, thanks to the death tax, Jim adds a third certainty--taxes after death. 60 Plus presents a Benjamin Franklin Award to Members of Congress in both parties who sponsor legislation to abolish the third certainty, taxes after death. Original sponsors are Rep. Chris Cox (R-CA) and Sen. Jon Kyl (R-AZ).

Pretty classy, hiding the leadership bio page, yes? So who would do that? Well, the firm that provides the technology and registered the domain names, and appears to host 60Plus.org's email servers might do it. And who would that be? Generation X Strategies, GXS.net. And who is GXS.net?

Why it's none other than the recently former head of the VA Republican Party, Jeff Frederick!

Amongst the list of GXS clients which I'd like to highlight are Media Research Center (Bozell's outfit) as well as the RNC and the Texas Christian Coalition. And what else is supercool is that GXS has procured some Federal and State government contracts, as well as a Minority Owned Business status by the Commonwealth of Virginia.

Jeff Frederick was ousted as the VA Republican Party Chair in April of this year, but prior to that, since July 8 1996, and up to today runs GXS services
for 60Plus.org, and then therefore powers the contribution technology at 60Plus.org's website, which is what this is all about. Money.

Abramoff (Shill-ius Maximus), Martin (Astroturfius Nastius), Frederick (Republicanus, Head of VA Party), PhRMA (Tauzin, probably hired because he has a drug sounding name) - probably all legal relationships, but they seem way too cozy to me. And the poor saps who are scared by this fearmongering ad have no idea that PhARMA doesn't need their help to keep their drug prices high, but Jim Martin and Jeff Frederick are really happy to facilitate the money exchange for them.

The icing on the cake? 60Plus.org's National Spokesman is Pat Boone. Yep, No More Mr. Nice Guy Pat Boone - and when you think about it, none of them in this tale are nice guys at all if you ask me.

Here's an interesting angle on the disruptive Town Hall Protesters.

Is Rachel Maddow Accusing
Conservatives of Being Mafiosi ?!?
In this clip about the Astro-turfing of opposition to, well everything liberal but mostly public health care, Rachel speaks of "an organization that promotes itself as non-parmesan but appears to be anything but." Just listen.

Who's Behind Health Care Disinformation?
(Complete clip is HERE)
Visit msnbc.com for Breaking News, World News, and News about the Economy
Now we all know what the Right Wing Wind Machine is going to say about this; that Rachel was cryptically accusing the town hall disruptors of being Italian, which is of course code for Sicilian*, which is code for (cue dramatic riff on pipe organ) THE MOB!!

Obviously the Republican Party and all affiliates mentioned in Rachel's bit will be suing Rachel for defamation of character. Rumor has it that they've already retained the same attorney who's representing Kenneth Gladney, the man who was allegedly beaten by SEIU thugs at a town hall meeting in St. Louis. Good luck with that, Ken; it passes neither the laugh test nor the smell test.

In other news the Italian Anti-Defamation League have announced that they too will be suing Rachel for having associated them with Republicans. I personally think they've got a much stronger case going forward.. These days you ask most people and the Mafia seem downright benign next to the Repugnicants.

In other other news, there has been no response from the Pastafarians as to whether they plan to sue anybody. Most of them seem to be keeping their yearly vigil in keen anticipation of the Second Helping prophesied in their holiest of holy books, known only as the Dinner Menu. Unlike other religions that fast during such times, the Pastafarians keep vigil while eating basket upon delicious basket of fresh garlic bread.

~~~~~~~~~~~
* - Sicilian: (footnote) I realize that the town of Parma, from whence Parmighiani, is in the Italian province of Tuscany, not in Sicily. However, that is what is referred to as a "well-known fact," and as such has no place in any conservative or Republican argument.

FOX "news" really is
FAIR and BALANCED!!
(Who'd a thunk?)

My first internet stops every morning are to Crooks and Liars and Glenn Greenwald. As it happens, both sites were being rather critical of what Station Agent has dubbed the Lamestream Media (abbreviated LaMe) and I would like to call the Lamestream Mediocre, except that most of the time they don't even rise to the level of mediocrity. 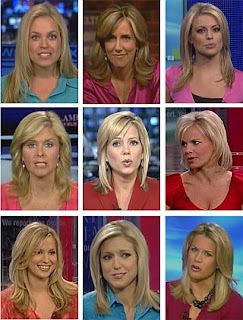 Somehow my morning mind (sometimes a little foggy until at least the second cup of strong coffee) had a moment of the utmost clarity. I guess I was thinking, "how does FOX "news" get away with calling themselves fair and balanced, anyway?"

I came up with an answer almost immediately. Got a dictionary handy? Never mind, we can use Merriam Webster's online. Here's the relevant portions of their main entry for the word FAIR (adj.):

1: pleasing to the eye or mind especially because of fresh, charming, or flawless quality

6a: marked by impartiality and honesty : free from self-interest, prejudice, or favoritism (a very fair person to do business with)

6b (1): conforming with the established rules : allowed (2): consonant with merit or importance : due (a fair share)

So, quite obviously FOX is implying that they conform to definition 6, but really they mean that they're fair in the sense of definitions 1, 2 and 9. I would say with an emphasis on 2 (and you should really click on the definition of specious if you don't already know it) and 9. And thank Gawd for 6c, though I don't think FOX wanted to imply that definition.

In short, fair and balanced can be taken to mean, "we present you with good-looking, mostly blond newsmodels who at least have the capacity to not fall off of their chairs."

Nor has this escaped those who watch FOX with a rather more critical eye than their target audience do. Media Matters' Simon Malloy did an article on Alternet about the rampant sexism on FOX back in 2006.

A person idly watching Fox News all day, for example, has an excellent chance of glancing at the screen and seeing some partial nudity or a male Fox News personality hitting on a female colleague on the air. Scantily clad women and on-air sexual harassment are the orders of the day over at Fox News Channel.

Cavuto also has a special obsession with a certain football game played every year in early February: the Lingerie Bowl. Last February, Cavuto interviewed two Lingerie Bowl contenders in their -- ahem -- uniforms. As the News Hounds blog pointed out at the time, this interview was preceded by a one-on-one with Focus on the Family's James C. Dobson, who said that parents must monitor what their children are "looking at because pornography is everywhere, as you [Cavuto] know."

The hypocrisy is phenomenal. Not surprising though when you consider that the greatest consumption of pornography is in the Red States that FOX targets. And they don't really care if a few people in that audience pick up on it either. This little gem appeared in the New York Post (to whom I shall not link) back in 2007. Note the reaction.

CHRISTIAN "media watchdog group" The Resistance is all worked up over the ultra-femme anchors of Fox News. The group's leader, Mark Dice, rants in an e-mail, "I see shorter skirts on the women of Fox News than I do on the prostitutes being arrested on cop shows." Fox responded, "We're always flattered to have everyone talking about us in one form or another."

It may flatter FOX, but I wonder how the objectified newsmodels themselve feel about it? No matter, they're probably grateful for the high paying jobs they hold more for the Clairol™-enhanced outside of their pretty little heads than whatever's on the inside. How grateful? Just go to YouTube and do a search for Megyn Kelly legs" (47 videos!) "Megyn Kelly upskirt" (28) "Gretchen Carlson upskirt" or "Gretchen Carlson legs" (29 videos each.) Or just type "Hot Fox" in the search window and see how it auto-fills. "Hot Fox News Women" has a whopping 314 hits, so don't tell me their viewers aren't obsessing. Thanks to William Mark for this nice paste-up of the T&A FOX shows daily.

But then, I don't really know. FOX isn't even a part of my satellite package.
(sigh)