There's an old joke that's so lame that it's reserved for those occasions when someone you know gets 'decorated' by a pigeon or seagull. "Aren't you glad that cows don't fly?"

Well, I guess if one had said that about the anti-government Teabagger crowd any time before today, it wouldn't have been much of a joke.

Sadly, that's all changed with the latest incident: a pilot named Joseph Andrew Stark flew his small plane into an IRS office today. It wasn't long before it was revealed that he had written a rat-wanger 'manifesto' -- boilerplate screed indicting Big Government and taxation in general.

Of course the mainstream media will avoid tying this in to the identical boilerplate screed that is voiced at any teabagger rally. They will also do their damnedest to pretend that an obvious act of domestic terrorism is nothing of the sort because it comes from someone on the right who is whiter than rice.

~~~~~~~~~~~~~~~~~~~~~~~~
UPDATE: OK, I'm going to have to deliver a full-bore mea culpa on some of the above. No excuses, I was simply mislead by some descriptions of Mr. Stark's 'manifesto' (which is also misleading - it's nothing of the sort.) and speculation that he was a member of the 'tea party.' Here's the text of his swan song, preserved at The Smoking Gun. Stark's original website was understandably shut down by the hosting server.

It doesn't strike me as being overtly political, save for the fact that he obviously wanted his last act to be a wake up call to the rest of the country. It does sound desperate, but what would you expect from a suicide note, however lengthy? And a lot of his complaints are exactly those that have been voice here for quite some time - not against big government per se, but against a corrupt system that no longer responds to the people, because it no longer has to.

I'm going to wait this one out before I offer any further opinions. Jumping into a story with both feet before all the facts are in is not something I'm any damned good at.

FBI Wants ISPs to Spy on You 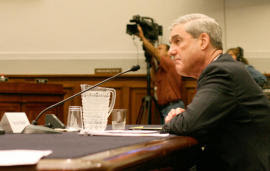 WASHINGTON--The FBI is pressing Internet service providers to record which Web sites customers visit and retain those logs for two years, a requirement that law enforcement believes could help it in investigations of child pornography and other serious crimes.

As far back as a 2006 speech, Mueller had called for data retention on the part of Internet providers, and emphasized the point two years later when explicitly asking Congress to enact a law making it mandatory. But it had not been clear before that the FBI was asking companies to begin to keep logs of what Web sites are visited, which few if any currently do.

The FBI is not alone in renewing its push for data retention. As CNET reported earlier this week, a survey of state computer crime investigators found them to be nearly unanimous in supporting the idea. Matt Dunn, an Immigration and Customs Enforcement agent in the Department of Homeland Security, also expressed support for the idea during the task force meeting.

Greg Motta, the chief of the FBI's digital evidence section, said that the bureau was trying to preserve its existing ability to conduct criminal investigations. Federal regulations in place since at least 1986 require phone companies that offer toll service to "retain for a period of 18 months" records including "the name, address, and telephone number of the caller, telephone number called, date, time and length of the call."

But the good news is that if you're not doing anything wrong, you have nothing to worry about. Frankly I'd describe this as universal warrantless wiretapping. If this is allowed the government would essentially have the 'right' to enter your home without a warrant and gather evidence against you for a crime that you have not yet formed any intention of committing. Shades of 'Minority Report.'

TAGS: Police State, Fascist Tactics, Fourth Amendment 'Rights'
Adolph Hitler Would Have Given His Remaining Testicle For This Ability
Posted by SadButTrue at 2/06/2010 07:20:00 PM 11 comments: