Orwellian, Kafka-esque, You Name It 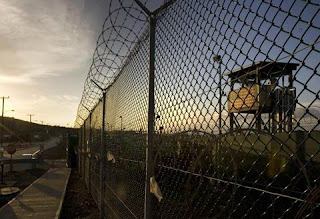 This one is so nuts it jolted my long-numb outrage nerve back to life.

So here's what the government's been arguing:
-People locked up in Guantanamo, some for almost a decade now, are there because they are "the worst of the worst" Al-Qaeda terrorists.
-We could prove it, but it would risk giving away state secrets that would aid and abet the terrorist cause.
-That's why we can't have such niceties as civil trials and, you know, silly things like evidence and so on.
-But they are really, REALLY bad men. Trust us.

However, the files that have been leaked reveal that the government long ago determined that:
-The majority of detainees were sent to Guantanamo for no reason at all.
-Many were innocents rounded up in Afghanistan because the US offered large rewards.
-Some were mere children, others senile old men.

Now they're saying that the detainees' lawyers can't even look at the leaked documents because they remain classified.
They're public knowledge now, but they're still, you know, top secret. Hush hush. Loose lips and all that.

So even if a document is out there that shows that US military "intelligence" (*snort*) found out 8 years ago that your client is completely innocent of whatever he's been accused of, (if they've even bothered accusing him of anything) you can't use that document to have him released.

If you think this kind of government over-reach will never be applied to you because you're an American citizen or not brown, could I just drop a couple of names? Jose Padilla. Bradley Manning.

I could comment at length on how batshit crazy this really is, and how much of a threat to democracy and human rights, but I think in this case the facts speak for themselves. I will however award this story the coveted Les Enragés Maximum Bullshit Award.

TAGS: The Security State, Batshit Crazy
No seriously, these people are nucking futz
Welcome to Amerika, land of the free