KO on Thin Ice at MSNBC? 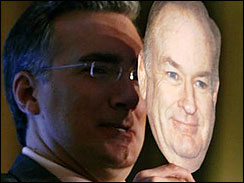 Greeting, Mobsters. Before I get into the post (it's about Keith Olbermann) I wanted to invite all of you that are interested in guest blogging at IST to email me here and spread the unruliness.

When Keith Olbermann took Donald H. Rumsfeld over his knee and gave the Defense Secretary the verbal spanking of his life, my first thought was, "Keith, you better get an intern to start your car."

Since that broadcast, Olbermann has not let up a bit, in fact he has intensified his attacks on the administration--calling Bush to task for his cowardly, un-American approach to dissent and for politicizing 9/11 while ground zero remains, as Ray Nagin put it, a hole in the ground.

My concerns for Keith's bodily well being were affirmed when he received some white powder in the mail, that after an 11 hour ordeal, turned out to be soap.

Of course, Olbermann is unflinching. He returned to work immediately and resumed eviscerating Bush, Cheney, Rummy, Condi and even managed a few whacks for O'Reilly from time to time, even though Keith really has moved beyond small game like O'Reilly.

Concern for Olbermann's well being is only one danger for the host. It's the people Olbermann works for, defense contractor owned NBC, that has former MSNBC employer Jeff Cohen thinking Olbermann might be on thin ice.

So why do I fear for Olbermann? Because I know his bosses. In the runup to the Iraq war, I too worked for MSNBC--as an on-air pundit and a senior producer on the primetime Donahue show.

As I detail in my new book Cable News Confidential: My Misadventures in Corporate Media, the Suits at MSNBC/NBC muzzled us and ultimately terminated us. They feared independent journalism and serious dissent. They smeared Bush critics, with MSNBC's editor-in-chief actually going on air--without evidence--to accuse Iraq WMD skeptic Scott Ritter of being a paid agent of Saddam Hussein.

Olbermann has been gaining in audience ratings. That provides him some security. But perhaps not enough.

Frank Dwyer has a great idea for KO, should MSNBC can him--Gore/Olbermann 2008, anyone?

VIDEO: Olbermann gets the word out about Foley's membership in the REPUBLICAN party (Crooks and Liars).

Guest Post By Station Agent of Ice Station Tango. A collective roar of thanks from the unruly throng at Les Enragés.org! -SBT-

Update (sort of): Congratulations Station Agent! Blue Gal, filling in at Crooks and Liars this week as guest compiler of Mike's Blog Roundup, has had the perspicacity to recognize THIS POST by Agent.