Special Feature: In the fourth installment of our fabulously successful guest blogger series, Pam from Musings of a Working Mom generously gifts us with this terrific post on the vital issue of electronic voter fraud. -SBT- 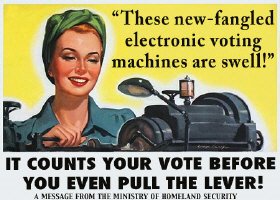 It's almost election day and the polls are showing that the Democrats will win the House and probably even the Senate. With every passing day, things are looking brighter. The end of the Republican occupation is just a month away - right?

WRONG. If there's one thing that we should have learned by now, it's that Rove & company don't play fair. If you can't win it, steal it. Read the following excerpt from the Washington Spectator Online:

OUR RIGGED ELECTIONS
The Elephant in the Polling Booth

o say that this election could go either way is not to say that the Republicans have any chance of winning it. As a civic entity responsive to the voters' will, the party's over, there being no American majority that backs it, or that ever would. Bush has left the GOP in much the same condition as Iraq, Afghanistan, the global climate, New Orleans, the Bill of Rights, our military, our economy and our national reputation. Thus the regime is reviled as hotly by conservatives as by liberals, nor do any moderates support it.

So slight is Bush's popularity that his own party's candidates for Congress are afraid to speak his name or to be seen with him (although their numbers, in the aggregate, are even lower than his). It seems the only citizens who still have any faith in him are those who think God wants us to burn witches and drive SUVs. For all their zeal, such theocratic types are not in the majority, not even close, and thus there's no chance that the GOP can get the necessary votes.

And so the Democrats are feeling good, and calling for a giant drive to get the vote out on Election Day. Such an effort is essential—and not just to the Democrats but to the very survival of this foundering Republic. However, such a drive will do the Democrats, and all the rest of us, more harm than good if it fails to note a certain fact about our current situation: i.e., that the Democrats are going to lose the contest in November, even though the people will (again) be voting for them. The Bush Republicans are likely to remain in power despite the fact that only a minority will vote to have them there. That, at any rate, is what will happen if we don't start working to pre-empt it now.

Even though this election could go either way, neither way will benefit the Democrats. Either the Republicans will steal their "re-election" on Election Day, just as they did two years ago, or they will slime their way to "victory" through force and fraud and strident propaganda, as they did after Election Day 2000. Whichever strategy they use, the only way to stop it is to face it, and then shout so long and loud about it that the people finally perceive, at last, that their suspicions are entirely just—and, this time, just say no.

Read the whole article and come back and tell us what you think.

We sit here naively believing that our votes will actually count, despite overwhelming evidence that many will not be counted or will be counted incorrectly. And many, many people will be disenfranchised, once again. They have done it before, and they will do it again unless we stop them. How many elections are we willing to forfeit to these underhanded and illegal tricks? Can our country survive another two years of fascism before we get our acts together and demand that our votes be counted and our voices be heard? If we don't, then envision the future George Orwell predicted, because we'll soon be living it: