Democracy: NOT a Spectator Sport

"No Pasaran" - The Battle of Cable Street
Tomorrow, Oct. 5th is the day that World Can't Wait is calling for a public protest to 'drive out the Bush regime', something they have been trying to do since their inception, as far as I know. On their website's home page they ask a simple but powerful question, "Can a regime headed in a fascist direction be driven from power?" We all hope fervently that the answer to that question is a resounding YES collectively and loudly shouted by millions of voices at once. 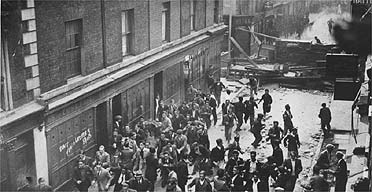 Here from the UK's Guardian Unlimited, a fine example of well-balanced and socially responsible journalism IMO, is the story of another protest, today celebrating its 70th anniversary. This protest, Oct. 4th, 1936, was mounted by opponents to a fascist Rally in London's east end. An unruly mob of 300,000 may well have turned the tide of history that day. If they had not taken to the streets, Britain could have become every bit as fascistic as Hitler's Germany.

"Shouting the Spanish civil war slogan 'No pasaran' - 'They shall not pass' - more than 300,000 people turned back an army of Blackshirts. Their victory over racism and anti-Semitism on Sunday October 4, 1936 became known as the Battle of Cable Street and encapsulated the British fight against a fascism that was stomping across Europe.

Mosley planned to send columns of thousands of goose-stepping men throughout the impoverished East End dressed in uniforms that mimicked those of Hitler's Nazis. His target was the large Jewish community.

..The Jews did not keep away. Professor Bill Fishman, now 89, who was 15 on the day, was at Gardner's Corner in Aldgate, the entrance to the East End. "There was masses of marching people. Young people, old people, all shouting 'No Pasaran' and 'One two three four five - we want Mosley, dead or alive'," he said. "It was like a massive army gathering, coming from all the side streets. Mosley was supposed to arrive at lunchtime but the hours were passing and he hadn't come. Between 3pm and 3.30 we could see a big army of Blackshirts marching towards the confluence of Commercial Road and Whitechapel Road.

I push the limits of fair use to reprint so much of this article, and hope that The Guardian will forgive me..

"[Eyewitness, Professor William Fishman] 'I pushed myself forward and because I was 6ft I could see Mosley. They were surrounded by an even greater army of police. There was to be this great advance of the police force to get the fascists through. Suddenly, the horses' hooves were flying and the horses were falling down because the young kids were throwing marbles.'

Thousands of policemen were sandwiched between the Blackshirts and the anti-fascists. The latter were well organised and through a mole learned that the chief of police had told Mosley that his passage into the East End could be made through Cable Street.

'I heard this loudspeaker say "They are going to Cable Street",' said Prof Fishman. 'Suddenly a barricade was erected there and they put an old lorry in the middle of the road and old mattresses. The people up the top of the flats, mainly Irish Catholic women, were throwing rubbish on to the police. We were all side by side. I was moved to tears to see bearded Jews and Irish Catholic dockers standing up to stop Mosley. I shall never forget that as long as I live, how working-class people could get together to oppose the evil of racism.'

Max Levitas, now 91, was a message runner and had already been fined £10 in court for his anti-Mosley activities. Two years before Cable Street, the BUF had called a meeting in Hyde Park and in protest Mr Levitas whitewashed Nelson's column, calling people to the park to drown out the fascists. Mr Levitas went on to become a Communist councillor in Stepney.

'I feel proud that I played a major part in stopping Mosley. When we heard that the march was disbanded, there was a hue and cry and the flags were going wild. They did not pass. The chief of police decided that if the march had taken place there would be death on the road - and there would have been,' he said.

Beatty Orwell, 89, was scared and excited. 'People were fighting and a friend of mine was thrown through a plate glass window.' "

There's more: audio links to the actual words of these witnesses are provided at the end of the Guardian's article. These senior CITIZENS are so obviously proud of the actions they took on that day. Their actions put a spine into the entire British populace, something that Winston Churchill could draw upon and build on a few years later when England was under more direct military attack from Hitler's Germany. There has seldom been a finer day in the defense of democracy than Oct. 4, 1936. What stories will you be telling about Oct. 5, 2006 when you reach your twilight years?