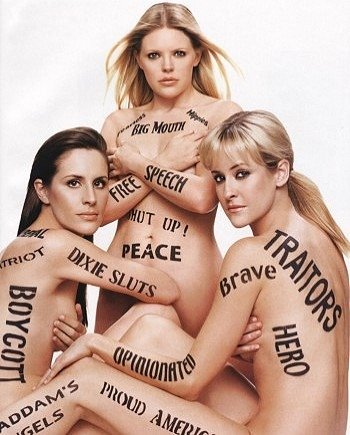 A couple of months ago Jump to the Left blogged about a pre-release screening of The Dixie Chicks' movie Shut Up And Sing. This documentary tells the tale of their treatment by the mainstream media following Natalie Maines' criticism of George W. Bush. I don't think it unfair to say that said treatment recalls the red-baiting tactics of Senator Joseph McCarthy. As Jump noted, the Chicks were essentially blacklisted, with radio stations across the country refusing to play their records in spite of positive reviews.

Well, the documentary has been released now, but not without further problems. As Glenn Greenwald reports, both NBC and the newly created CW network refuse to air advertisements for the movie. Harvey Weinstein's company produced the documentary. He perfectly described the situation with this statement, "it’s a sad commentary about the level of fear in our society that a movie about a group of courageous entertainers who were blacklisted for exercising their right of free speech is now itself being blacklisted by corporate America."
It is an essential element of the conservative message that too much government power represents a threat to liberty. How is it that corporate power, collectively much greater than government power, is not seen to be even more threatening? Greenwald compares this incident with similar decisions made by the networks in the past, among these CBS's rejection of an ad by the liberal United Church of Christ. "During that incident, CBS all but acknowledged that its decision was based upon the White House's potential disagreement with the ad's message."

"Once corporate-owned networks start selecting which politically-tinged ads are 'too controversial' and which ones are not, it is inevitable that messages which please the political leadership which regulates those corporations will be allowed, while messages that displease those political leaders will be rejected. That is plainly what is happening..
..The very idea that it is in the 'public interest' to prohibit ads that criticize the Leader is ludicrous on its face. The President is constantly given free airtime to argue his views and propandize on virtually every issue, and the networks endlessly offer forums for his followers and surrogates to defend him. And the networks' argument is particularly absurd now, given that networks are awash with cash from offensive, obnoxious, and repugnant political ads of every kind."

Glenn has once again shown incisive clarity in his presentation of this issue, showing how the supposedly liberal bias of the media is anything but. I usually avoid any links promoting commercial projects, but if you would like to see a trailer of the movie, go to The Weinstein Company's website. Or you can find Dixie Chicks' CDs and videos at Amazon.com.