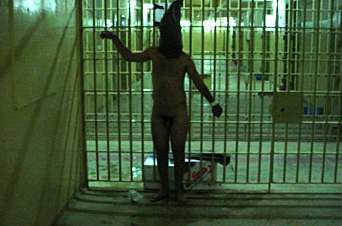 There is no effective opposition in the United States to the heinous acts that have become the trademark of BushCo™'s criminal regime. In fact, the recent passage of the Military Commissions Act enjoyed the support of 12 Democratic Senators and 31 Congressional Democrats. Therefore one would fervently hope that some international entity would be putting some pressure on to put an end to the worst abuses. Unfortunately, even that hope could be nothing more than cockeyed optimism, as The Guardian reported today.

"According to a secret intelligence report, the CIA offered to let Germany have access to one of its citizens, an al-Qaida suspect being held in a Moroccan cell. But the US secret agents demanded that in return, Berlin should cooperate and "avert pressure from EU" over human rights abuses in the north African country...classified documents prepared for the German parliament last February make clear that Berlin did eventually get to see the detained suspect, who was arrested in Morocco in 2002 as an alleged organiser of the September 11 strikes.
He was flown from Morocco to Syria on another rendition flight. Syria offered access to the prisoner on the condition that charges were dropped against Syrian intelligence agents in Germany accused of threatening Syrian dissidents. Germany dropped the charges, but denied any link.
After the CIA offered a deal to Germany, EU countries adopted an almost universal policy of downplaying criticism of human rights records in countries where terrorist suspects have been held. They have also sidestepped questions about secret CIA flights partly because of growing evidence of their complicity."

Complicity? That doesn't sound good. Too many EU countries are happy enough to keep quiet about these crimes because they knowingly aided and abetted the miscreants.

"More than 200 CIA flights have passed through Britain, records show.
[Journalist Stephen Grey] describes how one CIA pilot told him that Prestwick airport, near Glasgow, was a popular destination for refuelling stops and layovers. 'It's an "ask-no-questions" type of place and you don't need to give them any advance warning you're coming,' the pilot said...CIA pilots, sometimes using false identities and whose planes regularly passed through Britain, ran up huge bills in luxury hotels after flying terrorist suspects to secret locations where they were tortured. But they revealed their whereabouts and identities by indiscreet use of mobile phones and allowed outsiders to track their aircraft's flights."

This is an interesting look at the type of people that are involved in this program. Nothing makes them feel like partying more than rendering up some (probably innocent) individual to be tortured. And their partying is being paid for with your tax dollars. And the torture is being carried out in your name.
Torture, Human Rights, European Union, Rendition, War Crimes