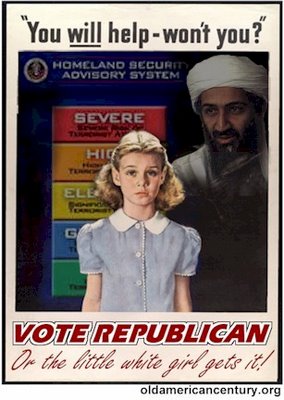 Only three weeks to go until a critical mid-term election. With the real possibility of a change in the majority status of both houses, what tactics dirty underhanded tricks can we expect from the desperate Republican party? What October surprise, promised to key Repug insiders weeks ago by Karl Rove will boost their fortunes and put them over the top at the last minute? Let the speculation begin! I'll start it off, and you can add your takes in the comments.

Ken (Is he gay?) Mehlman expects the Repugs to hold both houses on the basis of the surprise, so it's probably not something like capturing al Qaeda's #2 man again. That has been done to death, quite literally. Probably wouldn't have much more impact than a Cheney announcement that he'd gone a week without 'peppering' any rich lawyers in the face. And we can rule out a Cheney announcement too, unless the announcement was of Cheney's immediate retirement. That might give the party a boost. Just thinking about it makes me smile.

It could have something to do with Osama (Isn't he dead?) binLaden, whose frozen corpse could be thawed and 'killed' days before the polls open on Nov. 7. Even if the whole thing is a hoax, what difference does it make if the hoax isn't revealed until Nov. 8? Or the trial of Saddam (had nothing whatsoever to do with 9/11) Hussein, said to be wrapping up on Nov. 5, complete with same-day announcements of conviction and sentencing.

How about a staged terrorist incident coupled with a reminder that the Democrats are soft on terror? That's an old trick, but one the Repugs have relied upon time and time again. And thanks to the gullibility of a certain percentage of the electorate, it may well work again. Attacking Iran in a show of strength (like a rock, only dumber) might convince some hawks to vote that supported Iraq when it still looked like the coalition was winning.

Me, I'm a pessimist, so I think they're going to keep it simple. Have the October surprise in November, when the Republicans win lots of seats that it looked like they were going to lose. Thanks Diebold, thanks ES&S! Or if you want to get really pessimistic they could suspend the election altogether and declare martial law. It's not like they haven't gone out of their way to make that possible. Thanks Congress! Thanks Halliburton!