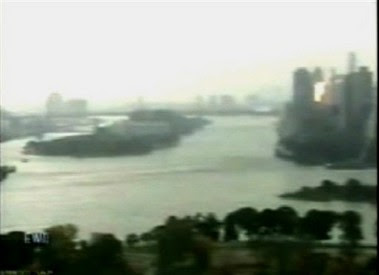 Coast Guard security video that shows the impact of Lidle’s plane with the skyscraper (the light on the right).

The ultimate novelist is God (or Fate or Providence or Serendipity or whatever supernatural puppeteer to which you yoke your belief system). He or it trumps any mortal scribbler and gets first dibs on the truth that Lord Byron averred was stranger than our homemade fictions.

And when Corey Lidle’s plane crashed into a Manhattan skyscraper last night, the wreckage raining on the street like manna from Hell, it seemed to have been scripted by a celestial scribe with an almost impish weakness for irony and cruel timing.

Because you know what was the first thought that popped into the head of every New Yorker, if not every American- “Dear God, not again.”

It’s a legitimate reaction, one further legitimized by a National Intelligence Estimate that had to be leaked to an American public willfully kept ignorant, a 16 agency report that unanimously said that we’re more vulnerable to terrorism both here and abroad than ever before. Those of us with even rudimentary long-term memory skills will recall the State Department’s now-suppressed annual report that last claimed terrorist acts had tripled in just the year between 2003-2004 (which is, not coincidentally, our first year of occupation in Iraq).

The specter of terror, though nonexistent this time, reared its ugly head for just the briefest of moments and, until word got out that Corey Lidle was on board, it must have been 2001 all over again for many Manhattanites. And dwarfed in front of that specter, before the now-iconic scowl of Atta and the grin of bin Laden, maybe some of us could recall the recent spectacle of George W. Bush standing at Ground Zero, the anniversary of a five year-long mission still unaccomplished. Standing in the hole that’s the unfilled grave of close to 3000 innocent people, a hole that stands as mute testament to the hollow promises of an administration that had somehow allowed this to happen, a hole that pocks the face of New York like a suppurated wound that stubbornly refuses to heal.

And reinforcing the horrid déjà vu, no doubt: The sight of military fighter jets streaking across the Manhattan skyline…

And then, even when Mayor Bloomberg assured New Yorkers that this was not a terrorist attack but a horrible accident that could’ve, should’ve been avoided, the first question, however unasked by mutual consensus, must’ve been, “Can we afford to assume that we’re safe?”

Yes, God is a hell of a novelist and no human ink-stained wretch could’ve timed this event and question better than He has, since an unusually important midterm election that’s largely, if not totally, defined by National Security and the War on Terror, less than four weeks away. The Lidle/Stanger crash, while in no way connected to the GOP, nonetheless gives American voters one last chance to ask this troubling but legitimate question before they cast their votes: Which party can be trusted more with national security? How safe are we when every ball of flame, every car backfiring, brings the phrase "terrorism" to many lips?

The administration has been walking a tightrope shaken back and forth by the political winds. The closer we get to an election, the less safe they want us to think we are. After the election, we’re told we’re not giving a former terrorist-sponsoring nation enough of a break when they want to buy our ports. We’re safe but we’re not totally out of the woods, yet, folks. It’s almost darkly comical watching this administration twisting itself in Orwellian contortions trying to keep us simultaneously placated yet on edge. You know, just so we don’t get lulled into enough of a sense of security so they don’t lose the proletariat to that bin Laden hand-holding Democrat Party.

Because, after all, though we’re safer, says the faces on the Jumbotrons of our plasma TV’s, it’s not as if we can encase in a plane-proof lucite bubble like the one around the White House over our greatest metropolis.

Corey Lidle proved that last night. And that was nothing more than a yet to be explained accident, not a years-in-the-making plan designed to thwart our defenses and embarrass our Homeland Security officials.

And maybe our esteemed Vice President was more right than he knew. Perhaps it is no coincidence that we haven’t been attacked since 9/11. Only perhaps, as Ron Suskind had opined in a recent interview, it’s because al Qaeda has chosen not to attack us. Why should they? Since the only real gains that we’ve made in the war on terror is in freezing their assets, they're saving a bundle of already-tight money since the administration is doing its damned level-headed best to keep us terrified enough to keep in power the same party that sleepwalked us into this war and paranoid state of mind.

So when you look up for guidance as you‘re about to cast your vote this November 7th, instead of praying to God the celestial, darkly-comic novelist, consider, instead, a party that’s likelier to find some way to keep the planes in the fucking air.

An unruly thanks from the mob to Jurassic Pork of Welcome to Pottersville.
-SBT-