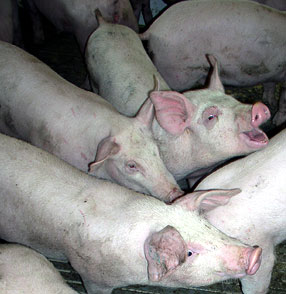 This Piece from Huffington Post is an indication of the dark days to come if the already insanely powerful corporate community gets even more powerful. In California it is Proposition 90. In Washington it is Initiative 933. In Idaho it is Proposition 2. In Arizona it is Proposition 207. The legal authority contained in these ballot measures is so extreme it can hardly even be accurately described. It seems the corporate community wants the authority to equate potential profits with actual money in the bank. The message sent is, 'screw you America - show us the money.'

"There is a law on the ballot in four states that says if I want to open a hog farm or a chemical plant next door to your house and you don't want me to do that, then YOU have to pay ME not to -- you have to pay me all the money I MIGHT have made..
..if you want to stop a corporation from dumping toxic waste into the river from which you get your drinking water, or stop them from venting dangerous chemicals into the air, then YOU have to PAY that company not to..
..The far right says that a government stopping a company from dumping waste into a river is 'taking money' from that company." 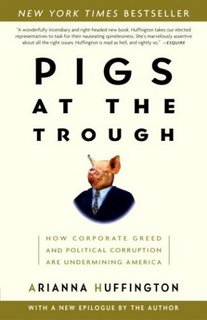 This whole thing reminds me of a recent 'Broken Government' piece on CNN, where I heard that Washington has over 30,000 registered lobbyists, or about 60 for every Senator and Congressman. They spend billions of dollars a year trying to make sure that democracy doesn't work for people, it only works for big business. As your rights and freedoms are eroded on a daily basis, corporate rights are being increased dramatically. Some pigs walk on two legs.

It also reminds me of this piece from yesterday's New York Times. It's about Bob Richardson, a 58 year old Texan who catches feral hogs (with his bare hands, no less) and sells them live to organic restaurants in Europe. Sounds like a heck of a way to make a living. He makes just under $30,000 a year doing this. It sounds like a backbreaking lifestyle.

So I came up with this idea. Somebody should hire Bob to go to Washington D.C., and start rounding up these lobbyists and hogtie them, throw them in the back of his Toyota pickup truck, and we'll pay him a handsome bounty on them. With the reduction in porkbarrel spending by government that would result, I'm sure it would be well worth it. We discretely won't ask what happens to them, just so long as they never return to Washington or any state capitol to carry out their nefarious 'profession.'
Update: (1:45 am, Nov1) This links to an article about how business is lobbying for reduction of regulations of accounting procedures in the wake of the Enron and Worldcom scandals;
NY Times: Businesses Seek Protection on Legal Front