Active Soldiers Ask Congress for Withdrawal, Troops Kept Out of Action for Debt, Bush Was Never "Stay the Course," More...

by the Station Agent 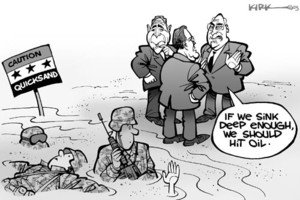 It's a sad, sorry state of affairs...

...it's The Iraq News:
VIDEO: Of course, Bush never was all "Stay the course." How many fingers, Winston? By the way something, he never said cut and run neither! How about Kvatch's idea--Hold and Pump?
VIDEO: Watch Zalmay Khalilzad as he expertly instills confidence--he says victory still "possible" in Iraq. It's possible that Halliburton will find that missing money in Iraq and drop it in the National Treasury, too.
VIDEO: A fortnight before the mid-term elections, I look at the BBC's look at the US political debate over Iraq.