What Can One Man Do?

Putting The War In Iraq on Trial 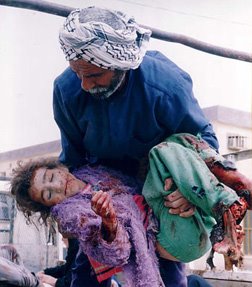 How can this not be a crime?
The moral courage of one man has the potential to change the outcome of the war in Iraq. That one man, Army Lt. Ehren Watada, refused last June to deploy with his unit to Iraq, citing his obligation as an officer not to obey illegal orders. He did not run, he did not hide, he stood up and faced the music. The army has charged him with disobeying an order, and he could face court martial. Time magazine reported on his case on the occasion of his first hearing Thursday.

...[L]awyers for Lt. Watada used the opportunity to put the war itself on trial, trying to prove he was right to see the war as "manifestly illegal," and as a result, to refuse to participate. "A soldier has an obligation to disobey illegal orders," said Francis Boyle, a Harvard-trained professor of international law who testified on behalf of Lt. Watada and whose mentor wrote the Army's field manual for land warfare. "Under the circumstances of this war, if he had deployed, he would have been facilitating a Nuremberg crime against peace."
As recently as last summer he was willing to go to Iraq. But the more he learned about the war, the more doubts he had, according to his public statements.
In January, after he became convinced that the war was illegal, he tried to resign rather than go to Iraq, but the Army wouldn't let him do so. As a compromise, he asked to be sent instead to Afghanistan, a war he supports. His request was not granted.

Capt. Dan Kuecker, one of the prosecutors, had this to say: whether the war is legal, "is not a decision for a lieutenant to make — it's a decision for politicians and legislators." What he doesn't say is that Congress has failed in its duty to scrutinize the legality of this war in any way. What he doesn't say is that Congress was defrauded by spurious claims of WMDs and a Saddam-El Qaida connection from the start. He doesn't mention that the Republican majority in congress has blocked Democratic attempts to examine the faulty intelligence that led to the war. He doesn't mention that 'this war' is not even a war under US law, because Congress has never declared it to be one.
The implications of Lt. Watada's decision are enormous. By his refusal to serve in Iraq he is shining a light on a very dark place, forcing the media to pay attention to an issue they would prefer to ignore. His case may force some politicians to reexamine their tacit support of this war. It may lead eventually to war crimes trials against high administration officials. All because of one man's courage. The personal costs to Lt. Watada are by no means insignificant. If court martialed and convicted, he would face up to seven years in prison. We recently discussed onthread the courage of Israelis who refused to serve in their country's military. We salute them in the refusenik banner you will find in the left sidebar. And Lt. Ehren Watada, we salute you. 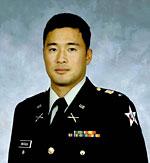 For further reading on this story, Jeanine Plante at Alternet has this column. And please visit Thankyoult.org for background on the support Ehren is getting from his mother, the ACLU, and a former UN Undersecretary General, among others.
Crossposted, with edits, from Friendly Neighbour