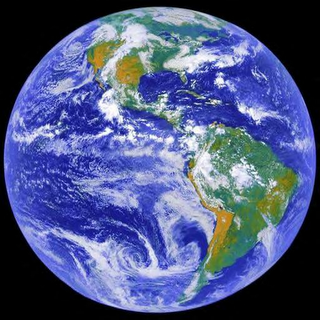 Our BLUE-HOT planet... Lovely portrait, huh? Looks professional. Except, it’s getting kind of hot here under the lights...

“Global warming isn’t real,” they say. “Just something the Left invented to help them get their way...!”

“They are suppressing information that confirms global warming,” the Left says. “Just look at who is financing the global warming denial squad...!”

It can be argued that the Right is happy when big energy is happy because, well, politicians on the Right are either in bed with big energy or they are big energy. And if there is no groundwork and infrastructure in place when we reach peak oil, basically, big energy can set all the prices, call all the shots, and buy the means of production for just about everything. Or so Marx might say. Assuming there still is production.

Let’s consider the Left. If the Left is fabricating the global warming phenomenon, they benefit...how? (Pause here and think hard.) The Right, i.e., G(lobal) W(arming) Bush, says the Left invented the “myth” of global warming to gain power by spreading panic. Moreover, if suddenly there is money to be made in alternative fuel research and development, we might just invent more efficient systems of resource management. ¡Quel outrage! Call the competition police!

Ross Gelbspan sums it up nicely:

“Apologists for the administration have justified its climate policies by citing politically conservative principles -- the withdrawal of onerous regulations, a belief in unencumbered free markets, and the appeal of corporate voluntarism. In fact, the Bush climate policies have nothing to do with political conservatism. Rather, they represent corruption disguised as conservatism.”

The science is in; global warming is real. And I have a hard time understanding how a money trail as thick and green as this one could be tripped over while true believers chase the spin that somehow global warming is a fabricated myth. Who would buy such Fuzzy Science?

~~~~~~~~~~~~~~
About the administration's Planetary Spin, tell us how you really feel... And do share your favorite links supporting the reality of global warming, exposing the financial supporters of global warming deniers, and documenting other efforts to thwart fuel efficiency.