With Piece on Politics and Terror 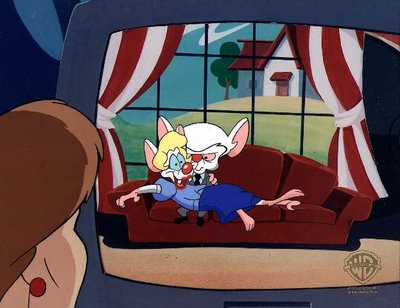 Pinky, are you pondering what I'm pondering?
Uh, I think so, Brain, but where will we find a duck and a hose at this hour?

Last Night Crooks and Liars put up this piece with a 12-minute video of Keith Olbermann talking about the nexus between BushCo™'s political fortunes and their deployment of news related to the Great War On Terror (GWOT). - "It refuses to assume that counter-terrorism measures in this country are not being influenced by politics." The premise is simple: whenever the White House finds itself in political trouble or sees a dip in the polls, they haul out whatever dubious terror threat they can cobble up, and use it to knock the bad news off the front pages. When a real threat occurs, it is held 'on ice' and released to the public at whatever time is most propitious for the government. Next to war-mongering, fear-mongering is the Republicans' favourite mongering.

Olbermann starts out with the recent British Airways arrests and the fact that the US pressured British authorities to act precipitously, tying this to the Lamont victory over Joe Lieberman last week. Then he uses this quote from Tom Ridge, the first secretary of Homeland Security. Talking about the infamous colour-coded terror warning system, Ridge said,

"More often than not, we were the least inclined to raise it. Sometimes we disagreed with the intelligence assessment, sometimes we thought even if the intelligence was good, you don't necessarily put the country on alert There were times when some people were really aggressive about raising it. And we said, 'For That?'"

Using this as a takeoff point, Olbermann meticulously associates the top ten instances of dubious, spurious or mis-timed GWOT news releases with some political embarrassment to the White House or the Republicans. Apparently any time little Georgie watched an episode of Pinky and the Brain was reason enough to ring alarm bells. After all, each episode contains the following exchange, clearly subversive;

Pinky: Gee, Brain, what do you want to do tonight?
Brain: The same thing we do every night, Pinky . . . Try to take over the world!
Now I personally see Pinky as George Bush and the Brain could be KKKarl Rove or Dick Cheney. One could do a dissertation on that subject, but I digress.

Watch the Olbermann report, and see what you think. I think he nailed it.