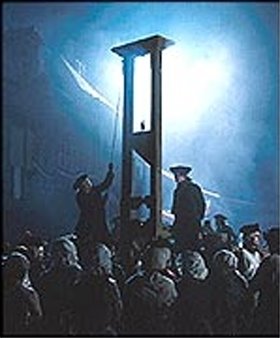 Aug. 8, 2006 -Hopefully the day that Ned Lamont kicks Joe LIE-berman out of politics for good. His entire career has been a false flag operation allowing the Republicans to have a senator in a state that would never knowingly vote for a Republican. His ouster will mark, to paraphrase Winston Churchill, 'not the beginning of the end, but perhaps the end of the beginning.' It should be one of our goals to wrest power away from the Republican party. That's a given. A secondary goal, no less important in the long run, should be to wrest power over the Democratic party away from the pseudo-Republicans. The American eagle will never fly again if it has two right wings. It's just not aerodynamically possible. Go, Ned, and join my favourite Democrat Russ Feingold in the caucus. Some of the bones that, put together, may form the liberal spine of the Democratic party someday soon.

Aug. 8, 2006 -The day Les Enragés becomes one week old (at 10:20 am). Remarkable. What we have accomplished in this one short week has been nothing short of astonishing. Over forty posts, at least a couple of thousand comments, and two scoops over, not only the mainstream media and news services, but apparently the rest of the English-speaking blogosphere too. I made a comment only a few days ago to the effect, "Abby Tatton and Jackie Schecter won't be talking about us on CNN anytime soon." I would like to publicly apologize here and now for my misplaced skepticism. Another significant thing about our reaching the ripe old age of 7 days is that blogflux will now allow us to add the cool mapstat function to the blog. That and a sitecounter are what's on my agenda for today.
-SBT-