The Truth About the Mainstream Media

David Sirota has this hard-hitting piece on his blog today about the depths to which the American Mainstream Media (MSM) has sunk in recent times. In unequivocal terms he describes how the same MSM who are constantly being accused of liberal bias (ironically these accusations come from the MSM themselves) are in fact parrots for the right wing establishment. Here is a juicy excerpt:

...all the talk of the Establishment's disdain for ordinary citizens is not just talk or conspiracy theory - it's very real, and very powerful.

Take, for instance, New York Times columnist David Brooks's piece yesterday - it is arguably the most brazen admission of elite disdain for democracy that has ever been printed in a major American newspaper. Before you dismiss that as hyperbole, read the third line of Brooks' piece:

It's hard to believe that American public discourse could have reached such a low point. That such a statement could be made in one of the most prominent newspapers without the editor firing this columnist's sorry ass and throwing him out on the street is inexcusable. Less than 90 days from the midterm elections this so-called journalist is all but calling for the suspension of democracy. I'm going to let Jefferson and Lincoln speak for me on the vital link between a free press and a functioning democracy. 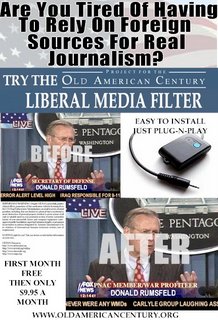 What can the ordinary citizen do to resist this insidious transition from objective reportage to blatant propaganda? First don't watch it or listen to it. There are thousands of good sites on the internet from which you can get your news. I particularly recommend that you seek out sources from outside the US, who can hardly be accused of partisan political bias. BBC News puts out a very good website version of their worldclass news service. So does The Guardian. Second, bookmark Media Matters for America, a site that issues regular reports on the manipulation of fact by the MSM. You'll be surprised to learn how often (well, constantly) they misrepresent what's going on in the world. Remember that their motive for manipulating the news is ultimately to manipulate you; your beliefs, your opinions, and even your actions. Don't put up with it.Crossposted to Friendly Neighbour
TAGS: media bias