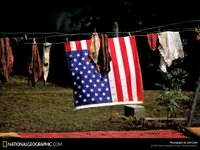 So, how do we feel about Bush's plans for labeling U.S. citizens as “enemy combatants” and their consequent loss of legal rights and protections...? There's a nice opinion piece in the ContraCosta Times today. Simply stated and on the money:

“FROM TIME TO TIME in our history, our leaders have allowed, even manipulated, a reasonable concern about a real threat to escalate into an excessive fear that dangerously undermined our liberties. The Red Scare of the McCarthy era was one example. Today, it is fear of terrorists.”

“The power to label individuals as 'enemy combatant'—and detain them indefinitely—presents one of the most basic threats not only to elemental human liberties, but also to the democratic order. Why? Because a government that can simply banish its foes—and those it erroneously seizes—from public sight simply by labeling them as beyond the pale is not a government that labors under the rule of law.”

Even top military leaders oppose Bush's plan for special courts. And although an early draft of the plan, leaked to the courts last week, has been softened, the new plan still allows the Secretary of Defense “to add crimes at will to those under the military court's jurisdiction...[and] would be likely to put more individuals than previously expected before military juries.” CSM posted a good description of how the proposal would dramatically expand military court powers today.