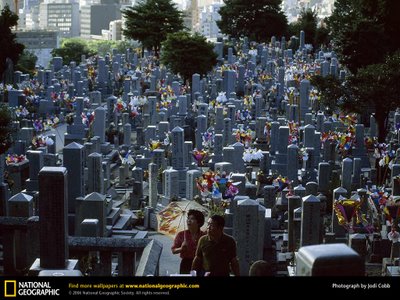 National Geographic's Photo of the Day:

A couple walks through a Hiroshima cemetery for victims of the world's first atom bomb attack. Detonated by the United States on August 6, 1945, the A-bomb fulfilled its promise of hastening the end of World War II when Japan surrendered nine days later. Today Hiroshima is an ultra-modern city with few battle scars, except for those in the memories of the hibakusha—bomb survivors.

(Text adapted from and photograph shot on assignment for, but not published in, "Hiroshima: Up from Ground Zero," August 1995, National Geographic magazine)

This photograph evokes a flood of thoughts, fears, and questions in my mind, and its application in the world TODAY is more than mildly unsettling. More about the hibakusha here. The suffering has yet to die.

Email ThisBlogThis!Share to TwitterShare to FacebookShare to Pinterest
Labels: Antiwar