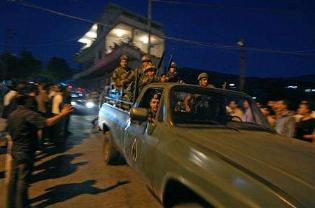 Members of the Lebanese army and security forces, coming from the town of Marjayoun which was seized by the Israeli army on Thursday, arrive at the village of Rachaya, north of Beirut August 11, 2006. REUTERS/Morteza Nikoubazl
The Scotsman (a good news source - Bookmark it!) has this report on the assault by Israeli warplanes on a convoy of civilians trying to flee southern Lebanon yesterday. At least seven PEOPLE were killed, and 36 wounded. The convoy had been organized by the Red Cross under the auspices of the UN, and one of the dead was a Red Cross worker. The murderous message being sent by Israel is unmistakebly clear, "Stay in your homes and we will kill you. Try to leave and we will kill you anyway."

For about 48 hours after this war broke out I still clung to the meme "Israel has the right to defend itself. Hizbollah and their Arab neighbours have sworn to wipe Israel off the face of the Earth." No more. By their continued and continuing acts of naked aggression, Israel's leaders have lost all claims to any shred of moral authority. Here's what spokespersons for Israel had to say after the attack was a fait accompli;

The Israeli army confirmed it carried out an air strike on the convoy, saying it had acted on the mistaken suspicion Hizbollah guerrillas were smuggling weapons in the vehicles and that it regretted any harm to non-combatants.
The army said a military inquiry concluded the convoy had been denied a request for permission to move but that it had set out anyway.
"The attack was carried out based on a suspicion. It was found to be incorrect," an army spokeswoman said.

Well, I'm sorry but that just doesn't cut it for the seven PEOPLE who lost their lives nor for the 36 who survived the terror of the attack and the agony of their wounds. Many I'm sure will have crippling injuries that they will have to cope with for the rest of their lives. All of those who got away 'unscathed' were nonetheless severely traumatized and will be having nightmares about this for some time to come. Many will have permanent psychological consequences of PTSD.

Asking questions later is not going to make this go away.
-
-
-
Footnote: In this article I capitalize the word PEOPLE when referring to casualties who lost their lives. I will continue to do so in any future reports on this conflict, to emphasise that they were living, breathing, feeling humans who loved and were loved by their families and friends.