People, You're Being Played!

It seems like nearly every piece we've done lately has a common element in it, regardless of the actual subject matter. That common element is the deliberate misrepresentation of the facts by the mainstream media to the American people. I wrote a piece about it HERE a few weeks ago, but it should be a regular feature here at Les Enragés, because it is one thing that really gets us enraged on a daily basis.
I was particularly incensed recently when US District Court Judge Anna Diggs Taylor ruled that the administration had 'undisputedly' broken the law in the NSA wiretapping scandal. This was HUGE news, the implication being that the pResident's actions were not only unconstitutional but CRIMINAL. So, what were the headlines about for the next several days? The bogus arrest of a suspect in the ten year old Jon Benet Ramsey murder case. On Southpark, this would have led to a declaration of 'shenanigans', and the entire mainstream media would have been run out of town.

In more recent pieces, we have the upcoming ABC whitewash of the events of 9/11/01, the NPR 'slant' on the Dixie Chicks' story, Keith Olbermann's exposé on the odd coincidence of terror alerts with other news embarassing to the GOP or their corporate masters.. ..the list goes on and on. In this recent piece Jump to the Left provided an essential link to this Take Back the Media article. I mention it to bring it into greater prominence for those of you who don't click on every link. It highlights the ties between BushCo™ and ClearChannel Worldwide Inc., sponsors of 'patriotic rallies' worthy of Nazi Germany in the 1930's.

"While Clear Channel promoted these as patriotic rallies, the attendees obviously felt otherwise. In addition to waving their provided flags, they also held signs condemning their fellow Americans - liberals, Hollywood, the Dixie Chicks. They were not so much patriotic rallies as pro-war rallies, and not so much pro-war rallies as rallies against anyone who opposes the Bush administration's policies."

With a midterm election coming up in only two months, expect to see a lot more of 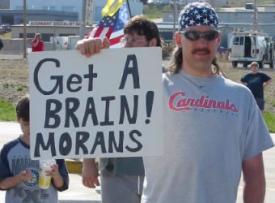 these shallow attempts to portray liberals as, "a tax-raising, latte-drinking, sushi-eating, Volvo-driving, New York Times-reading, body-piercing, Hollywood-loving left-wing freak show." The arguments admittedly aren't very convincing. But when the target you're trying to reach includes this guy, they don't have to be.