Coalition of the threatened 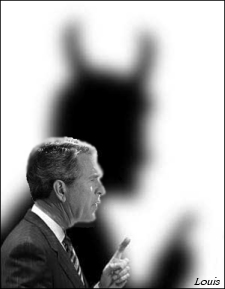 In an interview to be aired on 60 Minutes this Sunday, Pakistani President Pervez Musharraf claimed that US Deputy Secretary of State Richard Armitage threatened to bomb his country if he did not join the war on terror. CBC News has the report;

"The U.S. threatened to bomb Pakistan 'back to the Stone Age' after the Sept. 11 attacks if the country refused to help America with its war on terrorism, Pakistani President Pervez Musharraf says.
In an interview with CBS's 60 Minutes to air on Sunday, the Pakistani leader said the threat came from then-deputy secretary of state Richard Armitage. Musharraf said it was delivered to his intelligence director. 'The intelligence director told me that [Armitage] said, 'Be prepared to be bombed. Be prepared to go back to the Stone Age,' Musharraf said. 'I think it was a very rude remark.'"

Do ya think? I don't have my etiquette guide to hand, but my instinct says this goes way beyond 'very rude', all the way to PSYCHOTIC RUBBER-ROOM BATSHIT CRAZY. I'll get back to you on that after I've consulted Emily Post.

"Musharraf also said the U.S. made some demands that were 'ludicrous,' including one to suppress vocal support in his country for terrorism in the U.S. 'If somebody's expressing views, we cannot curb the expression of views,' Musharraf said."

Can nothing be done to curb this mad-dog of a pResident? He has admitted to more crimes than Ted Bundy and the Green River Killer put together. He brings shame to the White House and to America every time he opens his stupid, smirking mouth. He's ruining the economy while enriching his small circle of fiends (not a typo). He cares nothing about the average American, as amply demonstrated in the aftermath of Hurricane Katrina. He calls himself a Christian while going against every article of faith. He has sworn to defend the Constitution, and uses it to wipe his ass. Would someone at least force him to take his medication?
Consider this an open thread. Express your views.
Links: BBC News Report
TAGS:Bush, Musharraf, Foreign Policy, War Crimes, Batshit Crazy