Jerry Bremer Gave it Two Big Thumbs Up, And He Won A Medal or Something 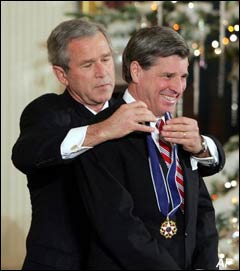 Feature: Les Enragés has been making arrangements to have guests from other blogs post here, and this is the first in a series of such posts. From Station Agent at Ice Station Tango
I watched Tucker Carlson contort himself completely out of the studio on his show today trying to make the argument that Bill Clinton was full of crap in his argument with Chris Wallace on Fox News Sunday--an event I just can't get over.

Carlson, and many other right wingers, can't accept that Bill Clinton did make an honest attempt to take out Osama bin Laden. Prominent Republicans in 2000, criticized the Clinton administration for focusing too heavily on bin Laden.From the Washington Post, on December 24, 2000, about fifteen paragraphs down:

"Overall, I give them very high marks," said Robert Oakley, who served as the State Department's ambassador for counterterrorism during the Reagan administration. "The only major criticism I have is the obsession with Osama, which has made him stronger."

L. Paul Bremer, who succeeded Oakley as ambassador for counterterrorism and who recently chaired the National Commission on Terrorism, said Clarke and the Clinton administration have their resources "correctly focused on bin Laden."

Bremer, you may remember, actually said, six months before 9-11 that the Bush Administration was paying no attention to terror.