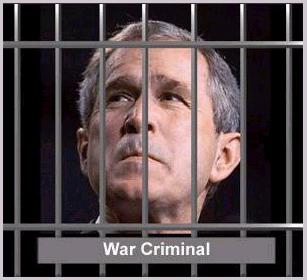 President Bush has acknowledged the existence of secret CIA prisons and said 14 key terrorist suspects have now been sent to Guantanamo Bay, Cuba.
The suspects, who include the alleged mastermind of the 9/11 attacks Khalid Sheikh Mohammed, have now been moved out of CIA custody and will face trial.
Mr Bush said the CIA had used an "alternative set of procedures", agreed with the justice department, once suspects had stopped talking.
But he said: "The US does not torture. I have not authorised it and I will not."

Apparently his well-publicised signing statement virtually nullifying the McCain anti-torture bill went down the grossly overused memory hole into which the administration throws all official records, along with Alberto Gonzales' notorious declaration that the Geneva Conventions were 'quaint.' Let's examine the implications.

First is the obvious fact that this is a too-little too-late response to the Hamdan v. Rumsfeld decision, which declared last June that all detainees were 1) subject to the 'common article three' terms of the Geneva Conventions, and 2) NOT subject to the ill-conceived and patently unconstitutional military tribunals proposed by the administration to try the detainees. Most legal experts concur that this decision exposes Bush, Rumsfeld, Gonzales, and several CIA officials to criminal charges. Sorry, there is no constitutional way to retroactively make these crimes legal.

Second is the trap the Bushites have sprung on themselves vis a vis Judge Anna Diggs Taylor's ruling in the NSA wiretapping case. In that case, the administration was deprived of the use of the State Secrets shield because they had already admitted the existence of the program. How bad a lawyer is Gonzales that this fact escaped him? Up until this, I didn't think anyone was dumber than Bush. I stand corrected.

The third point was brought up by Sam Seder of AirAmericaRadio's The Majority Report. Some of these detainees are really bad people, including Khalid Sheikh Mohammed. The Bush administration may have set up a situation where any body making a decision as to the disposition of his case will be forced into a choice between two equally repugnant options. They can either accept the illegal nature of Mohammed's detention, and the use of torture in obtaining evidence against him, or they can let the mastermind behind 9/11 go free. If this issue were to come up in, say, an impeachment trial, it's hard to see even the most partisan Democrat ignoring this. What politician would want to risk taking the heat of being perceived as directly responsible for letting a 9/11 conspirator off the hook, no matter how principled and constitutional that decision was?
TAGS: war crimes, rendition, torture, Guantanamo, Bush
Cross-posted from Friendly Neighbour