Shut Up and Sing! 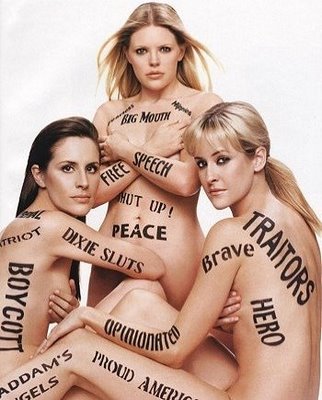 Listening to NPR this morning, I heard the favored and familiar Dixie Chicks song, Not Ready to Make Nice. The story explained that a documentary, Shut Up and Sing, about the fallout that ensued Chick Natalie Maines' statement that she was embarrassed to be from the same state as George W. Bush, is due for release this month--hatching scheduled for the Toronto Film Fest. Nice, thought I.

Wrong. The "promotion" for the documentary described the Chicks in fairly negative, unsympathetic terms, as hostile toward and having disowned their Country Music fans. Nothing I've ever seen from the Chicks or their representatives. And on NPR? It felt like Willy Wonka was serving imitation chocolate. The "piece" noted the fact that radio stations haven't been willing to play the Chicks' music despite positive reviews, and the resulting meager record sales. Clearly, the Chicks got their just desserts, the story implied.

Adding to the original "fallout" itself, the slant chafes. Well, media can be bought, and "news" can be spun, but I'm still mad as hell, and I've got a tiny purchase to make today...