Last night an onthread discussion touched on Fenders, genders, and Leslies. Now anybody named Leslie knows that it can be a boy's name or a girl's, and that can cause some gender confusion. But we were talking about the Leslie Rotating Tremolo Speaker System that adds such a haunting tone to many a Hammond organ. We were also talking about a unique Fender Stratocaster guitar that didn't know what side of the plate to bat from, as it was put together from some right-handed parts, and some left-handed. Well, here's a great rock video from Steve Winwood, singing the hit he made with the Spencer Davis group at the tender age of 17, when he was no more than a mannish boy. 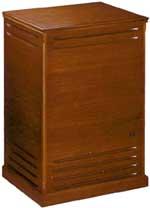 This tune, besides simply kicking serious ass on its own merits, manages to show off the Fender Stratocaster, the Hammond Organ, and the wonderful sound of the Leslie cabinet all in one go. A manly tip of my frilly bonnet goes out to Blue Moonchild, who may take note of the fact that Hammond sides with Fender on the issue of tremolo vs. vibrato, and against the vocal coaches. The doppler effect of the Leslie clearly creates a (perceived) change in pitch, not volume. You can see how I might have been confused on that issue.
TAGS: Fender Stratocaster, Hammond Organ, Steve Winwood, Gender Bias