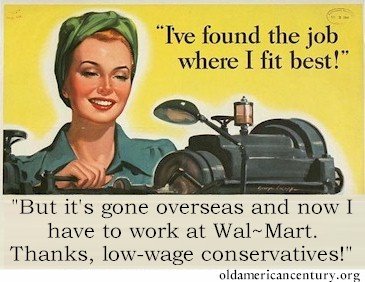 "Labor is prior to, and independent of, capital. Capital is only the fruit of labor, and could never have existed if Labor had not first existed. Labor is superior to capital, and deserves much the higher consideration." -- Abraham Lincoln

The next time some Republican talks about 'the party of Lincoln' try to remind him or her about this quote. In Lincoln's time the Republicans were the party of the people. Now they represent a corporate elite that has done nothing in honor of Lincoln's words.
And need I remind you, the corporate ethic is multinational, without patriotism except when their PR flacks think it suits their image. Corporations abhor the very idea of nationhood, borders, regulation, TAXES; they push 'free' trade (by which they mean the free flow of capital and resources) and globalization at every opportunity. They outsource labor to wherever it is cheapest while still selling their goods in the very markets they have injured to produce those goods.
How is labor doing these days? "In the first quarter of 2006, wages and salaries represented 45 percent of gross domestic product, down from almost 50 percent in the first quarter of 2001 and a record 53.6 percent in the first quarter of 1970, according to the Commerce Department."
How is capital and management doing? "In 2004, the top 1 percent of earners — a group that includes many chief executives — received 11.2 percent of all wage income, up from 8.7 percent a decade earlier and less than 6 percent three decades ago, according to Emmanuel Saez and Thomas Piketty, economists who analyzed the tax data." I should point out that these increases you see in the second statistic are included in the 'wages and salaries' of the first. If these top earners, who are not labor but management, were excluded, the decline in share of GDP would look much worse. Here's a graph from The Big Picture;

Take note that the American worker's productivity has gone UP, way up, during this same period. This is not about competing with a foreign worker for a job. This is about competing with your BOSS for a share of the profits your work created.
While the ultra-rich have seen an increase in their already inflated earnings they now pay less taxes, thanks to Bush and the Republicans. Don't hold your breath waiting for the benefits of these tax breaks to trickle down to you. Due to the miracle of globalization, those tax savings will probably be invested overseas.