Closer to a Full-Blown Police State. 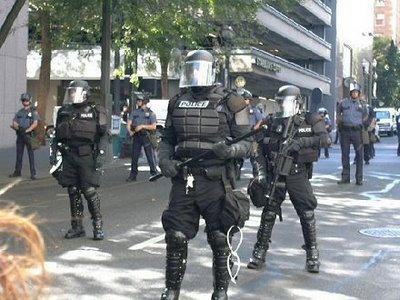 As the November mid-term elections approach, many Republican Congressional and Senate candidates will be trying hard to distance themselves from the unpopular occupant of the White House. Anyone who buys this poppycock should be carefully examined for a scar on the base of their skull where the control chip was implanted. That dog, as they say, don't hunt. But it will bite.
The ever-reliable Glenn Greenwald blogged on THIS STORY in the Washington Post today;

"A Senate committee today approved a bill supported by President Bush that would enable the administration to continue a warrantless wiretapping program that the White House launched after the Sept. 11, 2001, attacks.
The approval came after Republicans on the Senate Judiciary Committee blocked an amendment by Democrats that would have limited Bush's eavesdropping program and required the National Security Agency to report more often to Congress on its surveillance activities.
...Bush has urged Congress to give him "additional authority" to continue his administration's warrantless eavesdropping program." 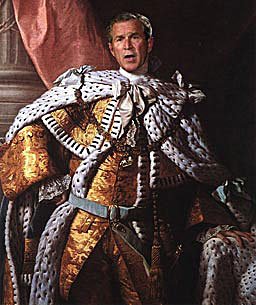 warrantless eavesdropping." Pardon me for jumping to the conclusion that Bush is making a power grab. In fact, what he is hoping is that Congress can somehow retroactively legitimize the illegal, unconstitutional, and criminal acts that he has already willfully engaged in for years. After key legal decisions against him, most critically the Hamdan v. Rumsfeld decision and the more recent decisions in Michigan and Oregon against the NSA wiretapping, our boy George is seeing his moronarchy crumbling around him.
Make no mistake, Congress cannot retroactively authorize the President to break the law. It is against the Constitution. The Supreme Court does not have the authority to allow such a law, should Congress pass it, to stand. That would be nothing short of treason. But let me get back to my opening point. As much as Republican candidates will try to distance themselves from chimpy between now and November, the vote in committee on whether to approve this odious bill was split along party lines. NOT ONE Republican voted to restrict Bush's illegal, unconstitutional and criminal behaviour in any way, shape or form. If you want checks and balances, vote them out of office.
TAGS: Constitution, Civil Rights, NSA, Wiretapping