Feature: In the second of our guest blogger series Les Enragés presents a piece from Jurassic Pork, who blogs with brilliant insight and clear voice at Welcome to Pottersville. -SadButTrue- 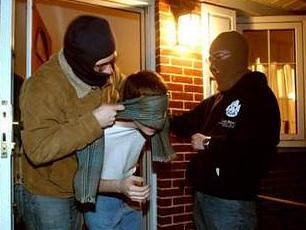 OK, now that it's established that the GOP's only real function is enriching Halliburton, Bechtel and the Parsons Group and keeping the right wing punditocracy employed, I have to admit to some curiosity as to what possible reason you all would still have to vote for virtually anyone in the Republican Party.

I mean, I may be jaded and cynical but I’m not stupid. Unlike the majority of your ilk, I’m smart enough not to bet on WWE matches neither do I swallow what Frank Sinatra said about his mob connections. Some things are self-evident and you have to grant me the right to start hurling breakables at the nearest wall whenever I come across someone who can’t see the obvious.

The obvious is that the Republican Party is in it for itself. They are all for staying in power, enriching their base, enriching Republican-friendly conglomerates and never, ever accepting blame for even one fuck-up. At least the Democrats have been coming out and saying, “OK, OK, we fucked up and voted for the war. True, we were voting based on cherry-picked and fabricated intelligence but now we realize the USA PATRIOT Act and the war in Iraq has quickly turned into a fucking boondoggle. So how can we fix it?”

The Republicans, meanwhile, are saying, in essence, “Not only are all our initiatives working according to plan, comrades, but we have over fulfilled our quota for the Five Year Plan and will begin a Ten Year Plan!”

To paraphrase Sponge in “Plowed”, their only chance is to connect with a dream because their best laid plans sure ain’t doing shit.

Your “President” is in over his head like a toddler stranded in the middle of the Atlantic. Meanwhile, the guy with his hand up his ass, Dick Cheney, is still clinging to the old “The insurgency is in its last throes” assertions even as virtually every day brings news of dozens more tortured bodies being unearthed in Baghdad. The GOP-run Congress has decided for the umpteenth time that it’s more important to let the Idiot Boy-King have his way than to do what’s right (read SadButTrue’s take on the nightmare fuel of a detainee bill just above this).

They had blamed the victims of Hurricane Katrina for not being solvent or smart enough to leave the city before the storm made landfall then finally slouched toward New Orleans after waiting a week, thereby proving what would happen to Blanche DuBois if she had to rely on the kindness of Republican strangers.

They’ve waged war on science and learning, have essentially turned our two party system into a paranoid monopolitical police state, have, in proud Republican fashion, rolled up one enormous deficit after another and have widened an already enormous trade imbalance with China.

The Republicans have denied you the right to file for bankruptcy, denied the Democrats votes on their amendments to said bill, have made having a national ID card with a microchip embedded in it mandatory, used No Child Left Behind as a vast data-gathering apparatus for the Pentagon, have sent your children, husbands, wives, your loved ones into a meat grinder more infamously known as Iraq while denying them armor and cutting their VA benefits.

Every intelligence agency under the American sky insists that we’re in more danger from terrorist attacks now than we ever have been, which only makes the PATRIOT Act and this detainee bill, weapons in the GWOT, look even more like the colossal, wasteful, shameless fascistic shams that they are.

Oh, yeah, your party of personal responsibility, when they’re forced to admit that fuckuppery has been committed, continually blame Bill Clinton, the Family Circus “Not Me” spirit of the GOP.

I could possibly enumerate their every evil since January 2001 but I’d like to think that I’ve made my case. If I haven’t, then I might as well be talking to Terri Schiavo. So, my question to you all is: What’s the attraction? What could possibly be in it for you to keep these ass weasels in power?

Is it the increasingly foolish and pathetic delusion that you’re getting in on the ground floor of something that history will once proudly call The Party of Bush? Or maybe by continuing to wage war on learning, on homosexuals, on immigration, on universal health care and on every progressive agenda under the sun that you’ll be given a ringside side to the Rapture so the Devil can hand out ponchos like at a Gallagher gig just before he splatters you with the brains of said liberals for daring to impose humanitarianism on humanity?

As Election Day draws near, I keep thinking more and more to the final words of a d r i f t g l a s s post entitled “Fat Karl” that ended with the words, ““Are you now, or have you ever been, a member of the Republican Party?”

When the current GOP, with its stubborn and insane insistence on ramming into the iceberg time and time and time and time again even as the ship is sinking, lands on the shit pile of history and we’re able to look at these times with the 20/20 vision of hindsight, I think that when people mention the Party of Bush, they will say so in hushed tones not in the spirit of reverence but of fear, as if saying “Bush” three times will somehow bring the Evil Old Idiot back to life. Schoolchildren will whisper “Party of Bush” in the same way that the children of Elm Street whisper Freddy Krueger’s name.

What was it that George Santayana said about that?