Looking Back in Anger

As the impeachment movement begins to gain traction, some key information about the origins of the Iraq War continue to dribble out.

For example, Senator Dick Durbin recently disclosed on the floor of the Senate that even though the intelligence committee that he is a member of had evidence which contradicted public administration claims about WMD in Iraq, he could do nothing because members of that committee are sworn to secrecy (h/t Crooks and Liars).

They should have broke that law.

The other revelation is about the deliberations conducted by the administration concerning the war. There were NO deliberations. This confirmation of the obvious comes from former CIA director George Tenet, who just published a big juicy book.

The row over how President Bush went to war in Iraq has re-erupted with a charge by George Tenet, the former director of the CIA, that a coterie of top officials pushed America into the conflict with no real debate as to whether Saddam Hussein actually posed an imminent threat to the US.

Mr Tenet's angry indictment of his colleagues is the first of its kind from a top ranking member of Mr Bush's once-vaunted national security team, and was instantly rebutted by the White House.

I'm not exactly impressed by Tenet and Durbin's "revelations". These were things that many of us knew all along and these guys seem to be putting this stuff out there at a really convenient time.

Why isn't Durbin still sworn to secrecy? Because everyone knows that the administration was lying? So? If you can break secrecy to point out a lie, why do you have to wait for public opinon to catch up?

George Tenet would look a lot better without the profit motive of selling a book and without that big ass medal hanging from his neck. 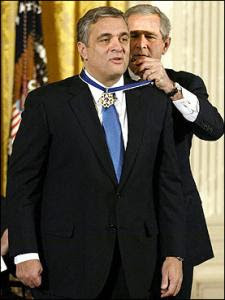 Thanks guys for speaking out, next time, do it as soon as you know that the lunatics have taken over and are going to get hundreds of thousands of people killed.