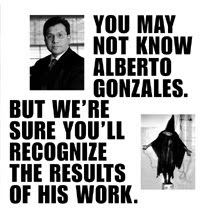 In yesterday's post I tried as best I could to bring us up to date on the Prosecutor Purge Scandal that Attorney General Alberto Gonzales must testify about tomorrow. You might have gotten the impression that I don't like Gonzales very much, and you would be right. As White House counsel he signed off on the US torturing prisoners and on warrantless wiretapping, and he also supported the ludicrous theory of the Unitary Executive, basically a claim to dictatorial powers vested into the hands of the President. Most of the excesses of the Bush Administration can be laid right at the feet of Alberto Gonzales. He is one of the few people more detestable than George W. Bush himself, an execrable pile of excrement responsible for more misery and death than the worst serial killers of all time. But I'll try to be as objective as a viewing of this video clip allows. When Arlen "magic bullet" Specter can criticize you for departing from plain common sense, you know you're in trouble.

To continue our timeline. Monica Goodling, that brightly shining star of Regent University's 'fourth tier' Law School quickly gave way in the headlines to the Mysterious Case of the Missing Emails. This is a story and a scandal unto itself. By using outside RNC accounts, many White House officials violated the Presidential Records Act, which aims to ensure that all official business is recorded, not only for posterity, but also to ensure that it is on the up and up. This was put into law after Watergate, so the implications are clear - you pull any funny business, you don't get to use the fancy office stationery. Despite administration protests that this parallel secret government existed to comply with the Hatch act, most people weren't buying that line. As Bennet Kelley points out in a very worthy (must-read) Huffington Post article,

The same president that today expects Americans to relinquish their Fourth Amendment rights to permit him to monitor their private phone calls, emails and mail since "if you are not doing anything wrong, you have nothing to worry about," also has sought from day one to conceal or distort information that the public is entitled to under the law - including creating a shadow email system to escape scrutiny. It is worth noting that our courts have long held that when a party is engaged in suppressing or fabricating evidence "the inevitable conclusion is that he has something to conceal and is conscious of guilt." Attorney-gate begs the question - what are they hiding?

Another aspect of the missing emails case is that it points to Karl Rove as being at the center of this shitstorm. Where there is dirt, you always seem to find KKKarl.

Flying in under the media radar was this story I missed until yesterday's marathon research session. At the beginning of April, the White House was actually trying to get the Senate to move up the date of Gonzales' testimony. "The push to more quickly get Gonzales to Capitol Hill reflects the frustration of Republican senators, the White House and even the Justice Department over how long it will take for the embattled attorney general to testify before Congress. Each passing day adds life to the story." Since it seemed earlier that Gonzo would prefer to delay any testimony under oath on the subject, why do you think they were suddenly so eager?

The answer lies in what was revealed by the document dump of this past Friday, the 13th of April, revelations so damning that Gonzo really is going to have to wear Depends® to the hearing. The dump was making the administration and DoJ look pretty bad, as evidenced in this New York Times piece citing an email from Kyle Sampson dated Jan 9, 2006 "and several related documents."

The e-mail message and several related documents provide the first evidence that Mr. Sampson, the Justice Department official in charge of the dismissals, had focused on who would succeed the ousted prosecutors. Justice officials have repeatedly said that seven of the eight prosecutors were removed without regard to who might succeed them.

Some of the new documents show the department’s acute awareness of individual United States attorneys’ political and ideological views. An undated spreadsheet attached to a Feb. 12, 2007, e-mail message listed the federal prosecutors who had served under President Bush along with their past work experience.

The chart included a category for Republican Party and campaign work, showing who had been a delegate to a Republican convention or had managed a Republican political campaign. The chart had a separate category indicating who among the prosecutors was a member of the Federalist Society, a Washington-based association that serves as a talent pool for young conservatives seeking appointments in Republican administrations..

..One e-mail message shows the White House urging the Justice Department to call Senator Jeff Sessions, Republican of Alabama, to give him information about the placement of J. Timothy Griffin, a former aide to Karl Rove, as the interim United States attorney in Arkansas..

..“WH political reached out to Sen. Sessions and requested that he ask helpful questions to make clear that Tim Griffin is qualified to serve,” said a January 2007 e-mail message from Monica Goodling, a former senior aide to Mr. Gonzales, to other department officials. “Here are the talkers on Griffin, as well as a narrative that can be used by staff, and his résumé. I think it would actually be helpful for all of the Rs to have it.”

While this certainly proves the process to be political, the question should be asked, is it improper? Let's apply the 'if it looks like a duck' method. The 'talkers' (talking points) Ms. Goodling refers to could just as well be characterized as a cover story. One email for instance (sorry, I've lost the link) refers to the fact that some of the prosecutors flagged for dismissal were in states bordering Mexico - and it could be spun that they were too soft on illegal immigration cases. Whether it is improper or not can well be inferred by these administration officials themselves, who consistently acted as though they at least thought it was improper.

Another story that emerged Thursday has also got to have Electrode Al worried. That story, a rumor really, reported 'according to one very solid congressional source' by MSNBC and phrased as a question by Time Magazine. "Will Congress grant Monica Goodling immunity from prosecution in order to compel her to testify about the Bush Administration's firing late last year of eight U.S. Attorneys?"

That's a good question, and it brings up an even better question. Goodling a 'trained' attorney (supposedly she is among that small minority of Regent Law School grads who actually passed the bar) seems to think that some aspect of this case was not only improper, but illegal. Criminal. Felonious. The only felony that has even been mentioned thus far in connection with this is a possible obstruction of justice charge relative to Carol Lam's dismissal. Or could charges be construed in the matter of Pete Domenici's improper conduct? There must be a number of felonies associated with a US Attorney abusing his offices to knowingly pursue a bogus criminal case. And just yesterday this story broke at the Albuquerque Journal (via TPM, via AMERICAblog) connecting Bush himself to the sordid mess of David Iglesias' firing.

You'd think that would be enough, but there's even more - there is this OpEd piece from yesterday's New York Times.

When the public first learned about the firing of eight United States attorneys, administration officials piously declared that many of the prosecutors had ill served the public by failing to aggressively pursue voter fraud cases (against Democrats, naturally). But the more we examine this issue, the more ludicrous those claims seem.

Last week, we learned that the administration edited a government-ordered report on voter fraud to support its fantasy. The original version concluded that among experts “there is widespread but not unanimous agreement that there is little polling place fraud.” But the publicly released version said, “There is a great deal of debate on the pervasiveness of fraud.” It’s hard to see that as anything but a deliberate effort to mislead the public.

The motive behind this was to further Republican efforts to disenfranchise groups traditionally friendly to Democrats - the elderly, the poor, ethnic minorities, etc. - by increasing support for measures like special voter IDs. "Claims of rampant voter fraud also give the administration an excuse to cut back prosecutions of the real problem: officials who block voters’ access to the polls."

That sends my mind back to the hundreds of thousands of minority voters who were 'mistakenly' disenfranchised by being included on lists of convicted felons. That was in Florida back in 2000 - the lists were drawn up by Data Base Technologies, since acquired by Choicepoint firm. Even Choicepoint's own webpage put up to counter the 'myth' of impropriety don't dispute that something very suspicious took place. Their main talking point is that they didn't yet own DBT at the time it happened.

This brings us full circle back to the HuffPo article I cited at the top of the page. As Bennet Kelley notes;

The administration, however, may be forced to take a hard line in order to prevent Attorney-gate from becoming its own political Waterloo, since the discovery of the White House's shadow email system raises numerous questions such as whether or not the system was used to conceal information in the Valerie Plame investigation or other matters. In particular, with reports that the shadow email system was hosted on the same servers used for the 2004 Ohio election results combined with lingering questions about Ohio voting irregularities; last month's sentencing of two election workers from Ohio's largest county for rigging a recount of the 2004 presidential vote; and recent blog reports that Karl Rove and some of his political operatives are under investigation by Italian and Mexican authorities for election tampering, it is conceivable that this investigation could lead to the biggest scandal in American history and reveal that Bush was never legitimately elected.

There must be some connections that I missed. If you know of anything substantial, let me know in comments so I can make the necessary additions to this post, the previous post, or possibly in some future post. Something HUGE may emerge from tomorrow's testimony that renders all of the preceding a mere bagatelle. At any rate, I have hopefully provided the background to fully appreciate the questions that will probably be asked, and the veracity of Gonzales' responses.

You can get your own popcorn.