In less than 48 hours

Alberto 'Abu' Gonzales will be testifying before the Senate Judiciary Committee again. Reports that he has been practicing testimony aside, I can't see him doing any better than he has in the past. Under the stern glare of Committee Chairman Patrick Leahy he will squirm, blink, sweat, cough, and fidget like a truant in front of the high school vice principal. 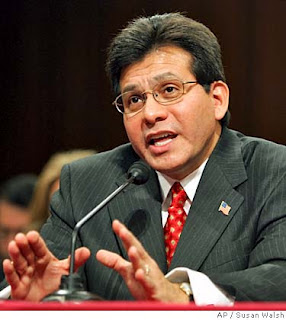 The man has a positive talent for exuding guilt, and Leahy knows exactly how to bring that talent out to the full. Frankly I'll be impressed if he doesn't piss himself - he has a lot of tough questions to answer.
HE IS SO SCREWED!!
This from ABC News:

Two days before Gonzales is to make a showdown appearance before Congress, Sen. Arlen Specter, R-Pa., said none of Gonzales' public statements so far has convinced him that the department's ouster of eight U.S. attorneys was justified.

Here's some background to ensure that you fully appreciate the flavor of the upcoming testimony, and some heads-up on recent developments. If nothing else, if you don't like my take on this story you'll have lots of links to pursue. It should also remind you of some elements of the story you may have forgotten. This is a long post, because there is a lot of ground to cover, but I'll try to stay on point.

This story goes back to Dec. 7, 2006 when eight US Attorneys were asked to resign so that they could be replaced with Bu$hCo™ loyalists. The story didn't really get picked up by the media until mid-January, as evidenced by this Olbermann video featuring the ever-incisive Jonathan Turley. Neither Olbermann nor Turley had picked up on what this was really about yet, but my own post on the subject got it even wronger. I thought it was judges, not US Attorneys who had been let go. One crucial element of the story that was evident from the start - the replacements would be picked by a new authority given the President under the USA PATRIOT Act. The provision making this possible was literally snuck into the act by Arlen Specter's top aide in the middle of the night - just after the Nov. 7 elections, and in the waning days of the Republican congressional majority. That stinks, and nobody with a nose failed to notice.

By late February, early March details were beginning to emerge about who had been fired, how it was done, and who the replacements were. Significantly a House Judiciary subcommittee subpoenaed some of the fired attorneys to find out more about the circumstances. Here in point form is some of what we now know, in part due to testimony given under those subpoenas:
With Lam being dismissed on the verge of pursuing charges against Republican officials, and with Iglesias and McKay both testifying that they felt they had been fired for not pursuing charges against Democrats, a clear pattern was emerging that anyone not watching FOX "news" could readily discern. A couple of observers tore themselves away from the Libby conviction to make comments compelling in their logic, and devastating in their implication for Bu$hCo™. We'll give Paul Krugman the first scathe;

"The bigger scandal, however, almost surely involves prosecutors still in office. The Gonzales Eight were fired because they wouldn’t go along with the Bush administration’s politicization of justice. But statistical evidence suggests that many other prosecutors decided to protect their jobs or further their careers by doing what the administration wanted them to do: harass Democrats while turning a blind eye to Republican malfeasance."

"In my opinion, the most important (and alarming) part of the story is where the authority to do this derives from: The USA Patriot Act. How exactly does giving Bush the power to replace inconvenient prosecutors protect us from terror? Oh, wait, it doesn't. It just protects him and his cronies from prosecution. Talk about politicizing terror."

By mid March the pressure was mounting on the Attorney General, and for that matter the entire Department of Justice. Gonzales' chief of staff D. Kyle Sampson announced his resignation on Mar. 12., an obvious target of the next round of subpoenas. It was also around this time that the parallel scandal broke about the FBI's abuse of National Security Letters. In Japan, Gonzales would by this point have been required to spill his guts on the floor - literally. Senator Charles Schumer (D - New York) called for Gonzales' immediate resignation. The New York Times has the money quote (Watch Senator Schumer's statement on Youtube);

Senate Democrats vowed today to get explanations, with or without subpoenas, from high Bush administration officials as revelations about the dismissal of federal prosecutors put renewed pressure on the White House.

“Just when we thought our faith could not be shaken any further, it has been,” said Senator Charles E. Schumer, Democrat of New York and a member of the Senate Judiciary Committee. “The latest revelations prove beyond any reasonable doubt that there has been unprecedented breach of trust, abuse of power and misuse of the Justice Department.”

On March 13, Gonzales gave this Press Conference (video opens in new window) on the scandal that had become known as the Prosecutor Purge. Herein was introduced the odious phrase, 'at the pleasure of the President.' We would hear those weasel words over and over for the next few weeks. Herein also was introduced the idea that, while he accepted responsibility for everything that went on in the Department of Justice, he wasn't really responsible because he didn't really know what was going on in the DoJ. The old Bu$hCo™ excuse of ignorance. Specifically though, he claimed to be 'out of the loop' on the whole affair. From TPM Muckraker: "He said that his chief of staff Kyle Sampson, now resigned, headed up the process for replacing the U.S. attorneys, and that Gonzales himself was 'not involved in seeing any memos' or 'any discussion of what was going on.' "

Gonzales must hate Fridays the way the rest of the world hates Mondays. Friday is Document Dump Day for the Bush administration, the day when they release information they know to be damaging in order to reduce as far as possible the media attention it will get over the weekend. Friday, March 23 was just such a day, and the docs dumped put the lie to Gonzales' press conference claims from only 11 days earlier.

"The e-mails, delivered to Congress Friday night, show that Gonzales attended an hourlong meeting on the firings on Nov. 27, 2006 - 10 days before seven U.S. attorneys were told to resign. The attorney general's participation in the session calls into question his assertion that he was essentially in the dark about the firings."

Joshua Marshall's comment pretty much says it all, "It is not too much to say that everything that has come out of Alberto Gonzales' mouth on this issue has been a lie. Sure, that sounds like hyperbole. But it's just a factual summary of what the public record now shows." I quoted another part of the same piece in a previous post from that same weekend. "

This isn't a case where Alberto Gonzales has fallen short of the president's standards or bungled some process. This is the standard. The Attorney General has done and is doing precisely what is expected of him... the president is fine with all of this. Fine with the fact that the Attorney General has not only repeatedly lied to the public but has also been exposed as repeatedly lying to the public. He's fine with at least two US Attorneys being fired for not giving in to pressure to file bogus charges to help Republican candidates.

It was about this time that Monica Goodling's name became more prominently attached to the scandal. By the time anybody knew who she was, she had already been subpoenaed by the Judiciary Committee, and announced through her lawyers her intention to avoid self-incrimination by resorting to the Fifth Amendment. Suddenly the administration starts recognizing the existence of the Bill of Rights, a document that they had studiously ignored for their first six years in power.

Well, I'm getting exhausted, so will continue with this tomorrow. We will continue with the story of the missing emails, including several details that have come out in the last few days. I have plenty more links to go through. This past Friday, the 13th. was another Document Dump, which brought out some interesting facts. In the meantime, I leave you with some of my conclusions, which I wrote before starting this timeline.
In all of this we must hold onto one thought, the ultimate response to the reight wing theme of 'there was nothing improper. US Attorneys serve at the pleasure of the President.' That is utter bullshit, and I'll tell you why. It has to do with the Constitutional principle of separation of powers.

The Constitution describes a government that has three independent branches. Once appointed by the President, all US attorneys become part of the Judiciary Branch, and take an oath to uphold the Constitution and laws of the United States of America. They are no longer working for the administration, or the President, and they are certainly not working for the Republican party or KKKarl Rove.

Any effort to interfere with judiciary independence through his power of nominating appointees is a usurpation of power by the president. Remember, until this odious aforementioned provision was secretly added to the USA PATRIOT act, these appointments had to be confirmed by the Senate. So right off you have one branch of government (the administration) treading on the turf of the legislative branch. All of this heaped on top of the indignity of Bush's signing statements, and tacitly approved thus far by a complacent complicit Republican majority in both houses. And Bush has used his lack of opposition in the legislative branch to stake out territory in the Judiciary.

It's not just about these eight US Attorneys, nor even about the 85 who were compliant enough to retain their positions. It goes much higher up. To the degree that someone like Alberto Gonzales himself, or one of the Supreme Court Justices appointed by either Bush or his father perceives his loyalty as to the President personally, or to the Republican party rather than to the Constitution, the doctrine of separation of powers goes out the window. Once gone, it will be nigh unto impossible to retrieve this vital principle. It was put there for a reason.

"The accumulation of all powers, legislative, executive, and judiciary, in the same hands may justly be pronounced the very definition of a tyranny."
-- James Madison --

UPDATE: I've finished the second and last part of my timeline - A Picture Emerges
(The result of connecting those dots)