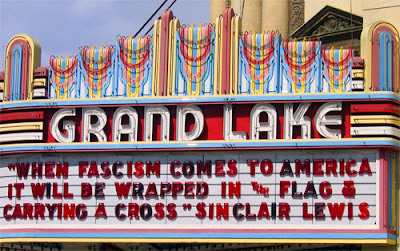 This post is part of the Blog Against Theocracy blogswarm.

A nation or state in which the clergy exercise political power and in which religious law is dominant over civil law. Iran led by the Ayatollah Khomeini was a theocracy under the Islamic clergy. (See Islam.)

Interesting that dictionary.com would pick the Iranian revolution to exemplify a theocracy. Its a good example. Very modern; very recent. The Iranian people tend to be rather unhappy under the rule of the ayatllahs. They're actually rather pro-American.

In a rare interview with the man who just negotiated the release of the British sailors held hostage in Iran, the reformer Behzad Nabavi offered these revelations:

According to Mr. Nabavi, it exists in Washington, "an Iran project" that is in the process of being implemented", a project that is "not necessarily a military one." In his office situated at the old Marble Palace, in the south of Tehran, that also includes the Majles, of which he assures the vice-presidency, Mr. Nabavi speaks of his concern facing the Americans.

"Evidently, I am afraid!" he exclaims. "How would I not be afraid of an America armed to the teeth and who demonstrated in Iraq its total disdain of respect for the sovereignty of the States? Yes, I am afraid. The Americans are apparently able do whatever they like; no matter the United Nations or even the Western public opinion". "The only and somewhat acceptable argument to the eyes of the western intellectuals justifying a hostile action against a country is the instauration of democracy", Mr. Nabavi said. It is for it, according to him, "that the best defense of Iran against the Americans would be to reinforce its democracy in order to deprive them of their arguments".

Interrogated on the voices calling for "the American interference", Mr. Nabavi declares: "It is obvious that it is the result of our mistake. The fact that people prefer a foreign invasion to living in the Islamic Republic is only the sign of our failure. We have not been able to fulfill the people's democratic aspirations and it is normal that they are disappointed". If one admits that the Iraqis are delighted with Saddam Hoseyn's end, one must also think about the possibility that maybe, the Iranians would celebrate at the end of the Islamic Republic as well".

But what's all that have to do with America? Advocates for American theology will never be convinced that theology is a fundamentally ineffective form of government. They certainly won't be convinced of that by citing examples of Islamic theocracy.

It's necessary in America to be extremely wary of Christian theocracy. American theocracy would come in increments because no one in the government would call the nation a theocracy, but remember, many already call America "a Christian nation".

Representative democracy can easily give way to another form of government. In the first half of the twentieth century the threat that Soviet-style communism might overtake American democracy fueled a paranoid, unrealistic witch hunt that lasted two generations. The perception that the American experiment can still be altered or reversed is etched deeply on the American psyche, creating the perception of all or nothing for a lot of large Christian groups. This paranoia creates a ready power base for those willing to exploit it. 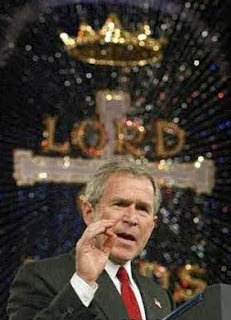 Writer Sinclair Lewis warned that if fascism came to America it would be "wrapped in the flag and carrying a cross". Karl Rove, Tom DeLay and other "intellectuals" with a great deal of influence over our current administration realized that the authoritarian temperament of our religious, military and corporate cultures could coalesce under the umbrella of the Republican party where they could maintain a "permanent majority" without having to dramatically altar the facade of democratic structure.

Well, Caesar had a deal with Crassus and Pompey too. Doling out parcels of American Empire to each of the three electorally victorious sectors proved to be more difficult than expected, and Rove's "permanent majority" crapped out after only six years. And he had "THE math"

Though America seems to be pulling out of our imperial skid, the role of the pseudo-theocratic character of the Bush administration has to be recognized in our history as a scary mistake that can not be allowed to happen again.

Ironically, it is Christians who should be most wary of Theocracy. The generation growing up now are being imbued with a distrust for Christianity, at least for Christian leaders.

In looking at the latest AP poll Christians in America have a great deal to be concerned about in the 2008 Presidential elections.

This AP Poll showed only 6% of those contacted considered morality an important characteristic for a Presidential candidate. The same poll showed 4% said it was important for a candidate to do what he promised he would do during his campaign.

Scarier yet for all conservative Americans, was that only 4% said it was important for the Presidential candidate to believe in God. Does that mean 96% of the people polled said that it was OK for a Presidential candidate to be an atheist? Today it seems to be okay to lie to the public, to have sexual affairs and to steal from the people while you are in an elected office.

Even tacit Theocracy, where the nation's powerful religious leaders have the ear of President, so much so that he acts as a rubber stamp for their wishes, is horrifying because by definition theocracy means a kind of totalitarianism. Instead of total authority resting in one or a few humans, the authority in a Christian theocracy rests with the holy texts and the structure of government is created by the most powerful interpreters of those texts. Have you seen those people? They were the ones who decided in the eighties, after wiping away more than two centuries of Christians primarily avoiding the filthy world of politics, that conditions were so intolerable they had to mobilize their congregations.

In 1986, Frank Zappa warned against the encroachment of theocracy in America. Bigger threat than Communism he said.


Even after David Kuo, the former head of the faith based initiatives program blew the lid off how the Bush administration leveraged the Christian Right's (misguided in my opinion) desire for power, after six years of Bush administration failure in every sector of governance, twenty-one years after Zappa's warning, there are those out there still pressing for Theocracy.

Even Kuo admits, after his very close contact with the Bushies, that Christians need a break from power politics in order to re-examine their approach. 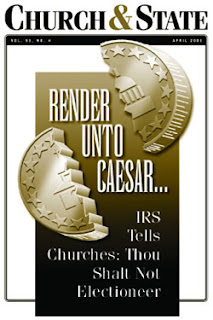 I would advise those who would rather America be ruled by an officially Christian government, or a tacit one that gives Dobson, Robertson and Falwell whatever they want (or at least way more concessions than they could ever ask for under a reasonable administration) to take solace in their faith in God and let go a bit. The God you believe in will not let you down.

Believe in the divine inspiration of the original idea of America--the idea of America as laid down by the founders. That idea, based on avoiding the tyranny of the monarchy reinforced by the church, will always persevere.

If it means that John Kerry, Al Gore or Hillary Clinton becomes president, voters can not pretend that someone like George Bush is good enough to be our president because it will probably benefit your particular religious denomination or reinforce your beliefs in the short term.

I think Kerry would have been an okay president, but perhaps eight years of John Kerry bumbling through a lackluster presidency would have created a strong Christian counter-culture that would transform the values of America without altering the structure of a brilliant governing mechanism.

Instead, Christians signed a deal with the devil, who sent us Jack Abramoff, Grover Norquist and the K-Street project to dismantle what giants like Washington, Jefferson, Adams and others laid down.