Between Bush Administration and Media on Iraq 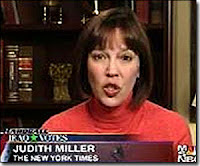 Let's go back in time, shall we?

I bet you didn’t know this. On March 6, 2003, President George Bush held a press conference at the White House. In that press conference the president said that Saddam Hussein and his weapons were “a direct threat to this country.”

More than 24 times during the press conference the president reflected on Al Qaeda and 9/11 and a connection between Saddam Hussein, all of which we know now was untrue. Bad enough. But here’s the chilling part, as revealed in Bill Moyers’ upcoming Buying the War (which will air on PBS on Wednesday, April 25 at 9 p.m.): after the president’s speech the White House press corps, those highly paid and highly visible big shots from CBS, CNN, the New York Times , The Washington Post and so on, started rasing their hands. But certain reporters had been pre-selected by the administration to be chosen by the president, something that everybody in the room was aware of. At one point, the president is shown to say, “This is scripted” and he makes a little laugh. Among the tough questions thrown to the president, or should we say, pre-selected, were “How is your faith guiding you?” to which the president responded, “My faith sustains me because I pray daily.” Media critic Eric Boehlert, reflecting on this piece of theater notes that there is a lot of nervous giggling going on. “I don’t now if it is out of embarrassment for him or embarrassment for them because they still continued to play along,” he says. “After a question was done. They all shot up their hands and pretended they had a chance of being called on.”

The writer of this preview, Alistair Highet, sums it up better than I can right now--I'm just too pissed to trust myself:

The cost of all this collusion between the mainstream press and the government in a lie: Bin Laden on the loose, one trillion dollars and counting spent on the war, 3,300 American dead, global distrust of the United States, and somewhere in the region of 600,000 dead Iraqis.

When do we start holding these people accountable?

VIDEO: Here's a preview of Buying the War: