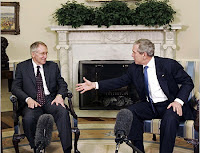 Harry Reid is actually kind of giving people hell lately. Nice. He went further, in fact than any prominent Democrat by saying that the war in Iraq is lost. He's now saying that Bush and that Congress will pass legislation bringing the troops home by October.

Here's the rest of the Iraq News:
VIDEO: Bill Moyer spoke to Bill Maher on Real Time about the selling of the Iraq War via the COM*. Moyer's show airs Wednesday night on PBS.
*You should know what COM means.
VIDEO: The BBC covers the carnage in Baghdad.
VIDEO: The evolution of Obama's Iraq war position.