..And Other GOP Corruption Stories
You'd think the Republican party would have learned from the November elections - the American people will not accept the hypocrisy of a party that spews endless platitudes about morals while engaging in the most egregious conduct imaginable. This week alone saw Republican John Doolittle of California forced to resign his position on the house appropriations committee after the FBI raided his home seeking evidence in a corruption investigation Wednesday. On Thursday, it was Rick Renzi's 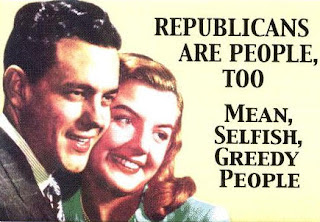 turn. The Arizona representative's family business was also raided by the FBI, for as yet undisclosed reasons. According to the Arizona Republic;

"The Justice Department has been investigating Renzi for months, but the subject of the inquiry has never been made public. Media reports last fall gave conflicting versions, with authorities said to be looking into either a land swap involving a former business partner of Renzi or a Pentagon contract involving Renzi's father, a retired Army general.
[...]
Democrats in Arizona and Washington have raised questions about whether the investigation into Renzi was connected to the ouster of the state's former U.S. attorney, Paul Charlton, who was forced to resign last December as part of a controversial purge of federal prosecutors."

Renzi was also forced to leave a powerful committee position, in his case on the House Intelligence committee. The Washington Post's Jonathan Weisman opines that these and other ethics breaches may hurt GOP efforts to retake Congress in 2008. Hmmmm.. D'ya think? Weisman also cited Sen. Pete Domenici and Rep. Heather Wilson's involvement in the dismissal of New Mexico US Attorney David Iglesias - one of the main events in the now infamous Prosecutors' Purge Scandal.

"Everybody's kind of a little bit numb," said Rep. Jack Kingston (R-Ga.). "There's this, 'What else can happen now?' feeling going around here."

Well Jack, when it rains it pours, as the Republican party's exposure as a systemically corrupted criminal organization proceeds in the light of the first real scrutiny they've been under in six years. Adding to the storm is this story in yesterday's Washington Post.

The Justice Department is conducting a probe of a $6 billion reading initiative at the center of President Bush's No Child Left Behind law, another blow to a program besieged by allegations of financial conflicts of interest and cronyism, people familiar with the matter said yesterday.

The disclosure came as a congressional hearing revealed how people implementing the $1 billion-a-year Reading First program made at least $1 million off textbooks and tests toward which the federal government steered states.

"That sounds like a criminal enterprise to me," said Rep. George Miller (D-Calif.), chairman of the House education committee, which held a five-hour investigative hearing. "You don't get to override the law," he angrily told a panel of Reading First officials. "But the fact of the matter is that you did."

the beleaguered No Child program is failing miserably at its stated objectives but succeeding fabulously in the real objective they well know the American people would never countenance - making GOP cronies rich. One could only imagine how many investigations would be under way if the entire Department of Justice wasn't staffed with 'loyal Bushies' and being micro-managed from the White House.

Check out this organizational chart from the second page of that Slate article (h/t RevPhat) - in comparison to only four people in the Clinton administration authorized to talk to three in the DoJ, there are 147 Bush White House flunkies talking to 40 DoJ officials. (Click on image for larger version.) The Republican party fits the definition of a criminal enterprise as defined in the RICO statutes, as George Miller points out. Worse, the Department of Justice looks like it exists only to enable these crimes.

The Doolittle, Renzi, and other corruption investigations are what they are - influence peddling for profit. My sixth sense tells me that there are other aspects to this No Child Left Behind case that put it in a different category. I hope the reporters covering this have the sense to ask two key questions. 1) - how much has the No Child program been used as a cover for the Christianization of textbooks, tests, and curriculum? and 2) - How much has intentional neglect from US Attorneys loyal to Bush enabled this and other crimes?