Wow, it's quite a busy day out there today. Among other things Attorney General Alberto Gonzales will be facing a Senate Judiciary oversight committee hearing into his conduct in the Purged Prosecutors Affair. For background, check out my posts here and here. This story though, concerns John Doolittle (R - CA), who barely clung to his seat against Charlie Brown in the last election, despite outspending him by a wide margin.

From Roll Call via TPMmuckraker: 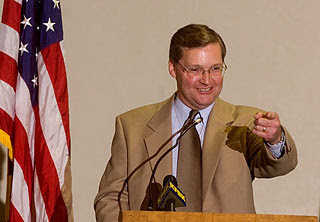 "The FBI raided the Virginia home of Rep. John Doolittle and his wife on Friday, though the Congressman’s lawyer contended the raid was focused on Julie Doolittle’s fundraising records rather than any of the California Republican lawmaker’s own activities."

Muckraker's Paul Kiel's added information reveals the fact that it is NOT all about Doolittle's wife. Besides - hiding behind a woman's skirt, John? - how despicable.

" Remember that a former key aide to Doolittle, Kevin Ring, who'd worked with Abramoff, resigned suddenly from his job late last week. As I wrote before, that's a clear sign that Ring may be preparing to plead guilty and implicate Doolittle.

Update: According to The Hill, the FBI searched the home last Friday -- the same day that Ring resigned."

While it is possible that Ring is co-operating with investigators to implicate Julie Doolittle over fundraising irregularities, it is far more likely that the real target has something to do with Doolittle's longstanding connection to convicted GOP bribemaster Jack "me" Abramoff.

Video: excerpted from a debate between Doolittle and Charlie Brown last October. Good job by mobster Jump To The Left jumping all over this one: Doolittle Exposed!

UPDATE: I couldn't hope to equal the unparalleled coverage given this story by Nate at Get In Their Face! Nate worked for the Charlie Brown campaign that opposed Doolittle in the last election, so if anybody has the skinny on this toad, it would be him. Say hi from the unruly mob. Oh, and another thing. Crooks and Liars is reporting that Doolittle is giving up his seat on the House Appropriations Committee. Seems the corrupt shouldn't be allowed near the money. Didn't something similar happen to Tom DeLay before he was forced out of politics?
TAGS: John Doolittle, Corruption Investigation