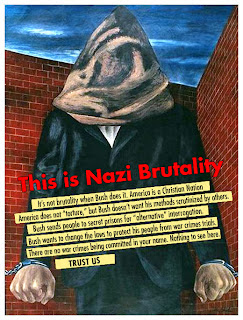 "Thirty eight people believed to have been held in secret CIA prisons - or black sites - are missing, according to a report by a US human rights group.

The Human Rights Watch (HRW) report also details allegations of torture by a terror suspect who was held in secret custody for more than two years."

I speculated in an earlier post on rendition victims that someone who had been tortured and then proven innocent was more likely to be killed than someone who could be shown to be guilty of involvement in terrorism. Why? Because an innocent victim is more of an embarrassment to the government, more of a legal threat to the torturers (with the potential for both criminal charges and lawsuits), and could 'reveal our methods to the terrorists.' - Bush and his administration don't want their methods revealed, after all. Does anyone really believe that Bush's motive is to protect America, and not to shield himself or others from justice? Because I sure as hell don't. And I'll tell you why.

"In a televised address in September, Mr Bush admitted that 14 detainees had been held at secret CIA prisons that used interrogation methods that were 'tough' but 'lawful and necessary.'

Rii-iight. Anybody remember this gem? These remarks were made by Bush in April, 2004;

Bush's statements as pResident show the same credibility as that Jon Lovitz character from Saturday Night Live - "Yeah, that's the ticket." - He is, in short, a pathological liar.

This article from The Washington Post gives you some idea of the treatment rendition victims undergo. Marwan Jabour's ordeal,

"...began in May 2004. In interviews, he said he was muscled out of a car as it pulled inside the gates of a secluded villa in the Pakistani capital of Islamabad.

In the week before his arrival, Jabour said, Pakistani intelligence officers had beaten, abused and burned him at a jailhouse in Lahore, where he was arrested. There two female American interrogators also questioned him and told him he.. ..would vanish for life if he refused. He said he was later blindfolded and driven four hours north to the villa in a wealthy residential neighborhood.. ..Jabour spent five weeks there, chained to a wall and prevented from sleeping more than a few hours at a time. He said he was beaten nightly by Pakistani guards after hours of questions from U.S. interrogators. Then he and others were whisked off to CIA-run sites. Some sites were in Eastern Europe; Jabour went to one in Afghanistan. Interrogators -- whom he described as Americans in their late 20s and early 30s -- told Jabour he would never see his three children again."

In Jabour's case, there was a relatively happy ending - which can't be said for the 38 still missing and unaccounted for.

"On his last day in CIA custody, Marwan Jabour, an accused al-Qaeda paymaster, was stripped naked, seated in a chair and videotaped by agency officers. Afterward, he was shackled and blindfolded, headphones were put over his ears, and he was given an injection that made him groggy. Jabour, 30, was laid down in the back of a van, driven to an airstrip and put on a plane with at least one other prisoner.

His release from a secret facility in Afghanistan on June 30, 2006, was a surprise to Jabour -- and came just after the Supreme Court rejected the Bush administration's assertion that the Geneva Conventions do not apply to prisoners like him."

I've already linked to Maher Arar's first-person account of his rendition to Syria, which follows the same pattern, as does the treatment of Jose Padilla. H. Candace Gorman at Huffington Post has a similarly sickening story of a man named Al-Ghizzawi, who was kept in Guantamo Bay's Camp Six (built by Halliburton at probably obscene profit margins with your tax dollars.) That article has this scathing passage, reminiscent of a recent Jurassic Pork piece. "Mr. Al-Ghizzawi asked me what the American people are doing about Guantánamo. I explained to him that Americans were really busy these days because some two-bit model died and everyone is trying to figure out who the father of her baby is."

Maybe America should spend a little more time on trying to figure out what happened to their democracy, and the rule of law.