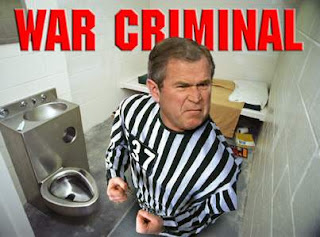 "The EU report said the CIA had operated 1,245 flights, some taking suspects to states where they could face torture.. ..'This is a report that doesn't allow anyone to look the other way. We must be vigilant that what has been happening in the past five years may never happen again,' said Italian Socialist Giovanni Fava, who drafted the document.. ..The parliament also called for an 'independent inquiry' to be considered and for closure of the US' Guantanamo Bay detention camp."

One of the disturbing things to me in this report is the following,

"Many of those taken from EU states were subjected to torture to extract information from them, the report said.

It said there was a 'strong possibility' that this intelligence had been passed on to EU governments who were aware of how it was obtained."

C'mon, it has been known for centuries that the 'intellegence' extracted under torture is completely unreliable. People just say what the torturer wants to hear. This information, the corrupt 'coin' paid to European governments for their co-operation, is counterfeit.

My spouse and I stumbled over here by a different page and thought I might
check things out. I like what I see so i am just following you.
Look forward to looking over your web page for a second time.

I do not know if it's just me or if perhaps everybody else experiencing problems with your site. It looks like some of the text on your posts are running off the screen. Can someone else please provide feedback and let me know if this is happening to them as well? This might be a problem with my internet browser because I've had this happen
previously. Thanks

Peculiar article, just what I wanted to find.

This is really attention-grabbing, You are an excessively professional
blogger. I have joined your feed and stay up for seeking extra of your wonderful post.
Also, I've shared your web site in my social networks

Good day! This is my first visit to your blog! We are a group
of volunteers and starting a new project in a community in the same niche.
Your blog provided us valuable information to work on.

You have done a marvellous job!

Fascinating blog! Is your theme custom made or did you download it from somewhere?
A theme like yours with a few simple tweeks would
really make my blog jump out. Please let me know where you got your theme.
With thanks

What's up, everything is going perfectly here and ofcourse every one is sharing facts, that's
truly fine, keep up writing.

Every weekend i used to pay a visit this site, because i want
enjoyment, as this this website conations truly fastidious funny information too.