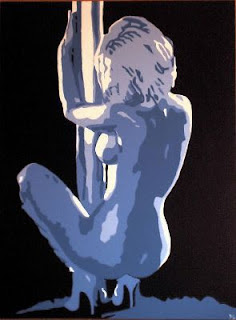 Out of the goodness of their hearts, a group of strippers in Vancouver B.C. called Exotic Dancers for Cancer have put on a special show at the Drake Hotel in Vancouver for the past few years to raise money to fight breast cancer. Only thing is, the recipient Breast Cancer Society of Canada has turned down the money, even though they accepted a $3,000 donation last year. As The Vancouver Sun explains,

" 'Our bottom line was that any woman can get breast cancer. It doesn't matter what they do, what their profession is,' Rany Xanthopoulo, the executive director of the BCSC, said at the time."

So what's different this year? This from (The Vancouver) Courier.com:

"In a letter to [organizer Trina] Ricketts, the society's executive director Rany Xanthopoulo, wrote: 'Unfortunately we will have to decline your kind offer as we have certain major donors that are not in favour of this connection. This decision came as a result of donor disgruntlement and together with the board of directors we have decided not to accept any donations from what donors consider controversial sources.' "

As it happens, I used to work as a musician in the very kind of bars that hire strippers, and often had them living across the hall. They are not, as some people assume, turning tricks on the side, and in my personal experience they are no less 'moral' than any other women. Quite often they are single mothers trying to raise their children, or students raising tuition for their university education. Just ordinary people who happen to look very good naked. And is there anything wrong with that?

Should you doubt their sincerity, they have another organization called Naked Truth, and discussed this issue on their Forum Page. They also do shows to raise funds for Prostitution Alternatives Counseling and Education (PACE) Society, a sex worker advocacy group in Vancouver's Downtown Eastside. So they are actively working to get women out of the sex trade and away from the drug addiction and exploitation that often accompanies it. Good for them.

As for the BCSC, I have to agree with the Sun on this one,