..Why You Should NOT Drink Bottled Water 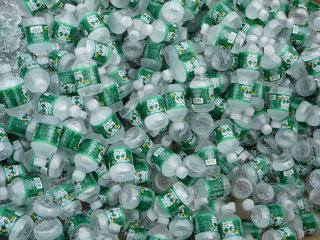 News item from Canada via CBC.ca: Environmentalist David Suzuki has come out against the drinking of bottled water. I agree, having never bought into the idea that water from France or anywhere else is superior to what I can get from my kitchen faucet. "Key environmental issues with bottled water, Suzuki said, are waste and uncertainty over the long-term health effects created by plastic."

In Canada at least, the government holds municipal water supplies to a HIGHER standard than commercial bottlers - so from a quality standpoint, you're better off with the tap. If you don't like the taste, buy some form of activated charcoal filter. There are a few varieties - simple Brita™-type jugs that go into the door of the fridge, inline filters that fit over the tap, and filters that are installed permanently under the sink. These systems provide pure, tasty water at a fraction of the cost of bottled water.

If you actually think that bottled water is safer than tap water, you should probably read this report, based on a four year long study from the Natural Resources Defense Counsel. It's rather long, and I barely skimmed it, but I'll take its conclusion from the opening paragraph, "The petition and report find major gaps in bottled water regulation and conclude that bottled water is not necessarily safer than tap water." For a synopsis, consult this Wikipedia article. If you think the water in your particular municipality is unsafe, I echo Suzuki's suggestion, RAISE HELL ABOUT IT! Anyone who would pump unsafe water into your home ought to be in jail.

The US consumed 25.8 billion litres of bottled water in 2004, spending over nine billion dollars for the dubious privilege. As Suzuki points out,

"It's nuts to be shipping water all the way across the planet, and us — because we're so bloody wealthy — we're willing to pay for that water because it comes from France.. ..I don't believe for a minute that French water is better than Canadian water. I think that we've got to drink the water that comes out of our taps, and if we don't trust it, we ought to be raising hell about that.. ..Not only does bottled water lead to unbelievable pollution — with old bottles lying all over the place — but plastic has chemicals in it.. ..Plastics are ubiquitous. I don't believe that plastics are not involved in a great deal of the health problems that we face today."

So, the water you drink from a bottle pollutes in many ways; the initial environmental and energy costs of manufacturing the bottle, only to taint your water with plastics - then the added environmental cost of shipping and trucking it to somewhere near you, and ultimately the bottle ends up in some landfill somewhere. Meanwhile another $10 billion gets transferred into the pockets of faceless multinational corporations. I don't think it's worth it.

Email ThisBlogThis!Share to TwitterShare to FacebookShare to Pinterest
Labels: Environmentalism