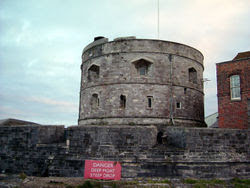 Way back in the 16th century a coalition of Catholic nations led by Spain decided that they would invade England and punish them for their heretical Protestant ways. After years of diplomatic efforts, political bickering, bribery and cajoling they finally assembled a fleet we now know as the Spanish Armada. In 1588, after a logistic nightmare getting the ships, men and equipment together they set out for the glory of God. Of course, by this time Queen Elizabeth I was well aware of their intent, and had cobbled together an army from the peasant farmers of the realm to defend against the anticipated onslaught. Her country appeared about to pay in blood for her father Henry VIII's snubbing of the Papacy, and establishment of the Anglican church.

The attempts to land the invasion force were a disaster for the Spanish coalition. Initial attempts were made near Southampton, and were thwarted by local conditions that could best be described as treacherous. Truth be told, in the days of square-rigged ships, any approach to land was fraught with hazards, and could only be taken on by an experienced ship's master equipped with hard won local knowledge of wind, current and tide. Even with the services of such a local pilot, one may have to wait days or weeks for the optimum combination of conditions to occur. To be caught on a lee shore could well lead to the loss of the fleet.

The Armada was forced to make its way further and further north along England's channel coast, but nowhere were conditions to be found that were favorable to longboats laden with soldiers, horses and cannons. Eventually the invasion fleet was forced all the way around the northern end of Scotland. I think a 'plan B' emerged, to stop in the still-Catholic parishes of Ireland to replenish supplies and take on replacements for the crewmen and soldiers who had already been lost. Water and food were running low, as such a lengthy voyage had not been contemplated.

The final blow to the Armada came when a gale force storm came upon the fleet and dashed the ships against the rocks of the Outer Hebrides. They were caught on a lee shore. A true believer could be excused for thinking that maybe God didn't want this particular plan to succeed.

But I digress. I'll admit, I told that story for no better reason than that I think it is one of the greatest examples of hubris in all the great span of human folly - and for background. This next bit I tell to make a point.

Queen Elizabeth I now had a standing army raised ad hoc for the purpose of repelling an invasion that had never come. Even before word made it to her of the Armada's fate, it was clear that the invasion had failed. Winter was coming on, and the soldiers were clamoring to be paid, and released from service to return to their homes and families. Times would be hard enough, for they had been away from their fields all summer, and larders would be thin.

The story goes that the chancellor of the exchequer came to 'Good Queen Bess' that winter to plead for the soldiers' cause. She was advised that many of the troops could and likely would starve to death without immediate relief. Her response was as cold-blooded and cruel as one could imagine. "Good. Let them starve. Then the problem will have solved itself at no cost to my treasury."

History has a terrible way of repeating itself. (Visit Ice Station Tango - more at The Washington Post)

"You want to know why we bloggers get outrage fatigue from time to time? It’s because of stories like this, stories such as this that drain the soul, that beggar the imagination at how criminally we’re treating and even exploiting these wounded troops after all the overtures Uncle Sam made them about taking care of them and their families, all the pie in the sky promises under the fucking sun just to get that John Hancock on the dotted line to get them one blip closer to making quota."