Why Do Federal Judges Hate the Law? 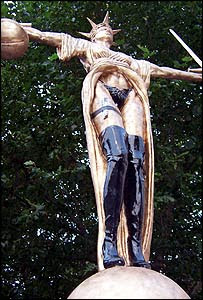 Jane Smiley did an interesting editorial at HuffPo yesterday entitled, 'What Would You Do If Bush Declared Martial Law?' To tell the truth, she was a lot more optimistic about the outcome than I would have been. I've always had a talent for painting worst-case scenarios, and I have no problem seeing BushCo™ using the most brutal possible methods of repression. I won't go into the depressing details.

"An editorial in the New York Times yesterday pointed out, for those of us who didn't realize it, that the Bush administration had inserted two provisions into last October's defense budget bill that would make it easier to declare martial law in the US. Senators Leahy and Bond have introduced a bill to repeal these changes, and it is important that voters keep track of this bill and hold their Congresspeople to account on it. Along with several other measures the Bush adminstration has proposed, the introduction of these changes amounts, not to an attack on the Congress and the balance of power, but to a particular and concerted attack on the citizens of the nation. Bush is laying the legal groundwork to repeal even the appearance of democracy. Any senator who does not vote in favor of the Leahy/Bond repeal of these provisions should promptly be recalled by his or her constituents."

(I gotta say here, I really love Senator Leahy. He's doing a great job of defending the constitution and making the fascistic bastards like Alberto 'Abu' Gonzales squirm. We need more like him.)

While Jane Smiley's editorial and the underlying New York Times editorial are disturbing and alarming, they don't come close to this piece in yesterday's NYTimes, that has got me tearing the hems of my garments and reaching for the ashes. Because quite frankly, it's stories like this that make Jane Smiley's hypothetical look much more like a real possibility.

The decision set the stage for a third trip to the Supreme Court for the detainees, who will once again ask the justices to consider a complex issue that tests the balance of power among the White House, Congress and the courts in the murky context of the fight against international terrorism.

The Supreme Court previously ruled twice that federal statutes empowered the courts to consider Guantánamo prisoners’ habeas corpus petitions challenging the grounds for their detention. In response to those rulings, Congress twice rewrote law to limit the detainees’ avenues of appeal. The most recent rewriting was at issue in Tuesday’s 2-to-1 decision.. ..That law, the Military Commissions Act of 2006, was signed by President Bush last October. Its enactment followed the Supreme Court’s rejection of his administration’s earlier arguments that the right of habeas corpus — the fundamental right, centuries old, to ask a judge for release from unjust imprisonment — did not apply to foreigners being held outside the United States as enemy combatants."

Article II, section 9 of the Constitution clearly states, "The privilege of the writ of habeas corpus shall not be suspended, unless when in cases of rebellion or invasion the public safety may require it." So how did these bozos get to be judges without even a rudimentary understanding of the relationship between the legislature and the U.S. Constitution? Yeah, yeah, I know - the simple answer is that they are Republican-appointed partisan political hacks, just like their boss, Alberto 'Abu' Gonzales. They treat Lady Justice like she was just another whore hired to entertain the likes of Dusty Foggo, Brent Wilkes and Randy 'Duke' Cunningham. Pull up her skirt, strip off her panties, and wipe her ass with the constitution, she's bought and paid for. I swear, they're running the government like it was some Skull and Bones kegger.

It makes me want to weep.