A Ray of Light

News From the Front in the Real War of Terror 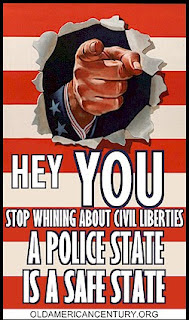 On the thread about Chris Dodd's efforts to restore habeas corpus to the American judicial system, GL responded with, "A ray of light breaking through the clouds?" Perhaps, but it may have been little more than the bright line that one detects along the edge of a closed door in a very dark room. A decision rendered by a federal judge in the Jose Padilla case may signal the opening of that door, if only by the slightest crack. With the light may come some much needed air into the room.

As reported by BBC News,

"A US citizen suspected of being an al-Qaeda conspirator is mentally unfit to stand trial, a psychiatrist for his defence has said.

Speaking at a hearing to determine Jose Padilla's competence, Angela Hegarty said he lacked the capacity to assist his counsel in the case."

Padilla was most recently in the news when he was photographed blindfolded and wearing sound-blocking earmuffs on a trip to the dentist. The inhuman sensory deprivation that he has been subjected to for 3½ years is the direct cause of his current mental incompetence. Naomi Klein of Alternet has more details. This is a link I put up in the hope you will actually click on it and read Naomi's entire shocking post.

"Arrested in May 2002 at Chicago's O'Hare airport, Padilla, a Brooklyn-born former gang member, was classified as an 'enemy combatant' and taken to a navy prison in Charleston, South Carolina. He was kept in a cell 9ft by 7ft, with no natural light, no clock and no calendar. Whenever Padilla left the cell, he was shackled and suited in heavy goggles and headphones. Padilla was kept under these conditions for 1,307 days. He was forbidden contact with anyone but his interrogators, who punctured the extreme sensory deprivation with sensory overload, blasting him with harsh lights and pounding sounds. Padilla also says he was injected with a 'truth serum,' a substance his lawyers believe was LSD or PCP.. ..These same practices have been documented in dozens of cases of 'extraordinary rendition' carried out by the CIA, as well as in prisons in Iraq and Afghanistan"

She observes, "America has deliberately driven hundreds, perhaps thousands, of prisoners insane. Now it is being held to account in a Miami court." Let's hope so. The Bush administration has made a habit of ignoring court decisions, including Supreme Court decisions, that didn't go their way. Bu$hCo™ ARE the terrorists, as this case clearly shows, and they are waging a war against the American people and the rule of law. Did I mention, Padilla is an American citizen, arrested on American soil, who has never been anywhere near any armed conflict? His arrest was way before the MCA was passed, and has been a textbook case of abuse of power. For a point of comparison, read Maher Arar's personal account of the way he was treated, in CounterPunch. Clearly this is all part of a wide-ranging program approved at the highest levels of government - they can't blame everything on Lynndie England.

In other related news, the Toronto Star reported Friday on a UNANIMOUS Canadian Supreme Court decision striking down the government's use of so-called 'security certificates' to detain and deport non-citizens suspected of terrorism ties. Turns out the certificate system is in conflict with Canada' Charter of Rights and Freedoms. Kudos to the Supreme Court of Canada - must be all that clean air up here.

In other other news, Les Enragés.org drew the attention of, and a link from Chris Dodd's blog for a piece we ran about Senator Dodd sponsoring the Effective Terrorist Prosecution Act, which aims to reverse the worst aspects of the Military Commissions Act (aka The War Criminals' Protection Act.) Kudos again, senator.

Scroll down the sidebar for a link to RestoreHabeas.org - it's our biggest graphic link, the Statue of Liberty in chains courtesy of Project for the OLD American Century. And it should be our biggest graphic, because it's our biggest concern. If further erosion of the Bill of Rights is allowed, the United States of America will exist in name only - a large expanse of North American real estate keeping Canada and Mexico from bumping into one another.

To reiterate: Restore Habeas, Repeal the MCA, and defend the Constitution. Dammit!