"He has enormous influence in shaping what the Army should and will be — not next year, not in five years, but in maybe 20 years." - Rick Atkinson, military historian and reporter. 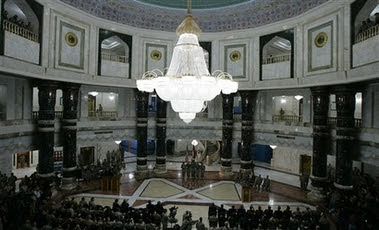 David Petraeus’s very name brings to my mind that of a Roman general. That’s only appropriate, since our ongoing and neverending occupation of Iraq is less than a safeguarding and planting of freedom and democracy as it's an imperial annexation designed to do nothing more or less than divide the spoils, or oil, of war.

Further reinforcing the all too convincing illusion that this is a page straight out of the latter chapters of Gibbon's Decline and Fall of the Roman Empire was the ostentatious ceremony in which Gen. David Petraeus took control of American forces in Iraq, the third commander in what is looking to be an endless succession of Can-do and Yes men who are getting more and more media-savvy with each refilling of the uniform.

With a calculated choice of venue that was every bit as obvious as that for Barack Obama’s announcement of his candidacy, Petraeus took command under a blazing thirty foot-wide chandelier standing on a marble floor in one of Saddam Hussein’s many palaces. That alone underscores hypocrisy, selfishness and just plain neocon cynicism in so many ways and on so many levels. 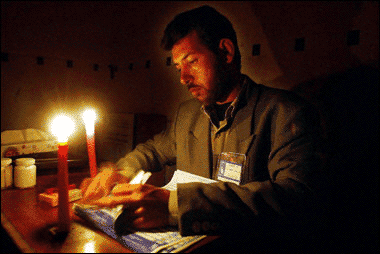 Let’s start with the fucking chandelier, which caught my attention long before I knew why. While most of Baghdad gets no more than four hours of electricity a day, these brassed-up assholes in their camo costumes walked on gleaming marble floors reflecting more light and using more juice than Baghdad residents generally get in a week.

All this does for me and for any other perspicacious reader is underscore our continuing ongoing failure to provide these people with even basic services such as electricity, sewage, enough hospitals and security from the military and police. Bechtel waddled out of Iraq last year after miserably failing to provide Baghdad with more than a fraction of the energy required to run the Iraqi capital, something that Saddam at least managed to do. We paid Bechtel several billion dollars to basically do half the job (the worse things got in Iraq, the more money they made). But what did they care? They were cost-plus contracts, which means you get the payday plus the bonuses regardless of how lazy or incompetent you are. But if you want to swear in a new general, well, of course the juice will be on.

Then there’s the fact that the ceremony took place at the ludicrously-named Camp Victory, which proclaims its boastful name from behind the heavily-fortified walls of the Green Zone, which is in itself an enclave in what is arguably the most dangerous city on earth today. Is that why Petraeus’s ceremony had to be indoors?

Then there’s the monstrous irony of having this dog and pony show in the middle of one of Saddam’s old palaces, in a place called Camp Victory, which seemed to imply, despite massive amounts of evidence contradicting it, that Saddam Hussein’s very existence was still a just and legitimate reason to unleash the dogs of war on a nation that had nothing to do with September 11th. Petraeus might as well had just dug up Saddam’s rotting corpse, dumped him under that blazing chandelier and put his big ole boot right on his torn-up neck, flexing biceps bulging from rolled-up camo sleeves.

And now, while we’re on the subject of Orwellian enduring victory, let’s examine what was perhaps the most outrageous statement that Petraeus had made just minutes after playing Capture the Flag with his predecessor Gen. Casey:

"We will have to share the burdens and move forward together. If we can do that and if we can help the people of Iraq, the prospects of success are good. Failing that, Iraq will be doomed to continued violence and civil strife."

Oh my fucking God. Where can I begin with even this brief paragraph of three sentences? In the headline, the AP writer, Lauren Frayer, calls Petraeus a “blunt” talker. “Blunt” usually means speaking tersely and truthfully without regard to decorum or sensibilities. “Blunt” never implies merely mouthing empty platitudes from Bush and Cheney.

Well, let’s start with Frayer’s own addition that comes right under Petraeus’s comments:

Meanwhile, the U.S. military reported the deaths of three more American soldiers, killed in an explosion Friday in Diyala province northeast of Baghdad. U.S. and Iraqi forces have battled Sunni insurgents and Shiite militias in Diyala for months.

The deaths raised to 36 the number of Americans killed in Iraq so far this month. At least 3,120 service members have died since the Iraq war started in March 2003, according to an Associated Press count.

At least 51 Iraqis were killed or found dead Saturday across the country. In one attack in central Baghdad, a car bomb exploded in a shopping district, killing six civilians and wounding 14.

So, according to this Princeton academic, that still doesn’t count as sacrifice and assuming our fair share of the brown man’s burden, in spite of the fact that 3120 US troops and possibly close to 700,000 Iraqis (an average of over 100 a day) have been killed in the glorious cause of freedom. Petraeus might as well have made that statement while doing a Moe Howard impression and saying, “Get back to work like I told you! Go o-o-o-on, get busy,” punctuating his pep speech with a dollop of Moe’s patented domestic violence.

So if Iraq permanently falls into the abyss of several civil wars and death squads and militias killing their own countrymen, it won't be the fault of the idiot who was the catalyst for this, in the first place: It'll be the fault of our troops, who from the gitgo had to defend themselves from a growing and increasingly sophisticated insurgency with wooden planks and sandbags instead of the fucking steel plate armor that the Pentagon's procurement office denied them year after year.

And you can’t possibly expect me to look over the fact that this was said in the middle of a posh palace on a posh base isolated from the daily horrors that’s jokingly referred to by those lucky enough to serve on it as “Campus Victory.”

So, bottom line, we’ve been given platitudes by an academic in an isolated palace that were in turn given to him by a brain-damaged rube from an even more isolated palace.

Excuse me for sounding defeatist but wasn’t this hare-brained scheme hatched by academics in think tanks like PNAC?

And before we start applauding this guy Petraeus and hoping for the best, let’s not forget two things: Number one, this guy was a Lieutenant General, a three star, before being given the job by a Senate that alternately ranged from brainlessly supportive to outright desperate. In other words, after two commanders and four years, George Bush and his administration couldn’t find one four star full general who could be trusted to manage this war.

Number two, let’s not forget what Gen. Petraeus did for his second tour of duty in Iraq: Overseeing the training of the Iraqi Security forces to replace the experienced Iraqi military disbanded by the CPA who would later battle as insurgents the new army that, to this day, still largely cannot stand on their own without US help. Says a former colleague, Col. Douglas MacGregor, "The Iraqi army today is, by anyone's definition, a disaster, and it is substantially his creation.”

So, my question is: Do we have twenty years to wait before this guy can retrofit our army to meet the demands of a nation that plainly wants us out?