“I reject your reality and substitute my own.” - Adam Savage, The Dungeon Master and George W. Bush, the other dungeon master. 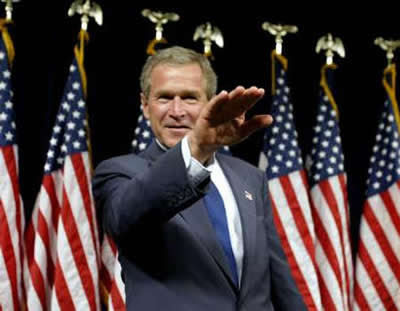 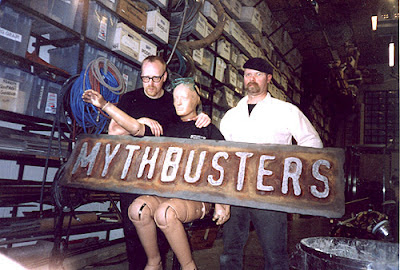 “Well, Buster can’t give the Nazi salute without help, Jamie.”

Any week now, I expect to watch an edition of Mythbusters and to hear this exchange:

Jamie: What’s the myth, Adam?
Adam: We got a daunting challenge in an email from a viewer. The myth is that George W. Bush is even a nominally competent President.
Jamie: (chuckling) Sounds like a no-brainer to me, Adam.
Adam: A slam dunk.
Jamie: A cakewalk.

Before the first commercial break, they’d no doubt come to the conclusion that that not only is the myth of Bush’s competence smashed to dog shit but that Buster, their long-suffering stunt dummy, makes a more suitable chief executive.

Because one fact is readily obvious: This rube named George W. Bush would be pumping gas in a sleepy gas station in East Texas if it wasn’t for who his father is. No amount of shredded or disappeared incriminating documents, no volume of spin doctoring, white-washing, denials or right wing bloviating and bellowing can change the fact that this breathing Brooks Brothers suit mannequin has been a miserable, catastrophic failure his whole life. Yet, he’s been spared the indignity of leaning on fenders and squeegeeing bird shit off windshields by dubious virtue of his and his father’s powerful friends.

Oh, yes, Jamie and Adam could bust the inexplicably enduring myth of the competence of this barely-functioning tool of every earth-crippling right wing agenda on the planet. I imagine it would go something like this:

Jamie: OK, there are a few things we can gauge to determine the competence of a chief executive. One of them is their foreign policy. We collected some clips from Youtube of George Bush’s speeches and we’re going to compare the results.
Adam (wheeling in Buster): Well, Buster’s up to the challenge.
Jamie: Nice business suit. It actually looks good on Buster.
Adam: I got it from Duke Cunningham’s yard sale. OK, run the tape of Bush announcing Shock and Awe in Iraq.
Bush on TV: “On my orders, coalition forces have begun striking selected targets of military importance to undermine Saddam Hussein's ability to wage war. These are opening stages of what will be a broad and concerted campaign… Our nation enters this conflict reluctantly -- yet, our purpose is sure. The people of the United States and our friends and allies will not live at the mercy of an outlaw regime that threatens the peace with weapons of mass murder…”
Jamie: OK, that was back on March 19, 2003. Icasualties.org says that 3118 US troops have been killed since then. Let’s see what Buster would’ve done about Iraq.
Narrator: So Jamie and Adam waited a half hour but Buster just sat there in his suit and didn’t invade anyone.
Adam: No mention of an illegal and unjustified invasion of a sovereign nation, no bogus WMD or al Qaeda claims. Troops killed in Iraq under President Buster: Zero.
Narrator: So, Buster wins this round. But President Bush is just getting warmed up and isn’t about to exit in defeat quite yet.
Adam: So, what’s the emergency response test?
Jamie: Another qualification for a chief executive is said to be how well as well as how quickly they respond to emergencies. There’s no better way of testing that than by watching archived footage of what happened on 9/11.
Narrator: So Jamie rolls the tape of George Bush in that classroom on 9/11 and gives America an education.
Jamie: Now as you can see on the playback Chief of Staff Andrew Card tells President Bush about the other plane hitting the 2nd WTC tower. Start the timer.
Narrator: Finally, after seven minutes, Bush gets up.
Jamie: So, it took George W. Bush a full seven minutes to get up off his little chair and to respond to the nation’s biggest disaster. You have My Pet Goat?
Adam: Right here. My boys didn’t want to part with it, though. I’ll just put this in his lap…
Jamie: Upside down? There’s no call for that, Adam. Start the timer…
Narrator: Like his flesh and blood counterpart, Buster does nothing but look somewhat presidential. Then, six and a half minutes into the experiment, Buster does something extraordinary and… busts a move.
Adam: Whoa!
Jamie: Buster keeled over!
Adam: Time elapsed?
Jamie: 6:27.
Adam: So, Buster moved before Bush!
Jamie: Well, it wasn’t as if Buster actually displayed any disaster response skills. You just didn’t sit him up straight.
Adam: Still…
Jamie: Yeah, still… Buster the dummy actually moved before George W. Bush and that has to be factored in.
Adam: So, are you ready to declare this myth busted?
Jamie: Not quite. I want to do one more experiment…
Narrator: After the break, the boys give Buster the all-important pretzel test.
Jamie: Well, it’s been three minutes now and Buster hasn’t choked, yet.

Have you ever considered about adding a little bit more than just your articles?
I mean, what you say is fundamental and everything.
Nevertheless imagine if you added some great visuals or videos to give your posts more,
"pop"! Your content is excellent but with pics and video clips, this site could undeniably be one of the greatest
in its niche. Superb blog!